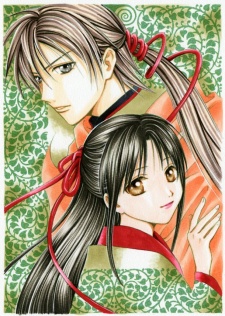 The Fushigi Yuugi series is loosely based on the legend of the Four Gods from China. The original manga told the stories of the priestesses of Suzaku and Seiryuu, and spanned 18 volumes released between 1992-1996. A prequel series following the priestess of Genbu then began in 2003, titled Fushigi Yuugi: Genbu Kaiden. The new series, Byakko Ibun, will cover the fourth priestess of Byakko, and its timeline falls between the original story and prequel Genbu Kaiden.

Multiple anime adaptations have been made of the series, including a 52-episode TV anime and three OVA series totaling thirteen volumes. A series of light novels were also published, primarily describing the characters' lives before the original manga series aside from the final two volumes.

After completing the first manga, Yuu Watase began serializing Ayashi no Ceres, which was subsequently adapted to anime as well. While primarily a shoujo mangaka, Yuu Watase's has also penned a few shounen series, including Arata Kangatari which received an anime adaptation in Spring 2013 and is still ongoing.


Update January 29
According to Yuu Watase's blog, the new manga will be a 51-page one-shot instead of a series.

I just want an adaptation for Genbu Kaiden...

Oh well, I will probably read this anyway.

Fushigi Yuugi anime in 2015 here we go. No wait, that would be way too soon.

I wasn't a fan of Fushigi Yuugi but I found Genbu Kaiden to be much better and engaging. I'm a little disappointed this is going to be a one-shot, but I look forward to seeing how she concludes the story of the four priestesses.

been reading her works for the sake of nostalgia since I grew up watching Fushigi Yuugi. Genbu Kaiden was good and a fun read. I'm actually excited to read about Byakko Kaiden since they were only mentioned in passing in the original series.

I'm a bit sad now that it's just a 51-page one-shot instead. I was hoping for the series. Though I'm pretty sure it'll be similar to the previous Fushigi Yuugi, I still can't help but feel excited. XD

Woderful news. Hope to read it when its release

I only watched the first 3 episodes, then did 2 or 3 "jumps" without finding anything interesting and then watched the last episode... and still didnt like it.

The reasons i didnt like this series is its ultra-boring / bad script, silly characters and the animation style. Also i dont really like anime where the dudes are a bunch of jerks.

I'm looking forward to it. I enjoyed Genbu Kaiden.

Not really fan of her manga , And I watched the anime with OVAs , it was kind boring :x sorry

Now these are some nice news! =D
I really like Fushigi Yuugi, it's one of her best works so far and I only need 4 Volumes to have all books in my bookshelf. =u=
I still haven't read Genbu Kaiden, but I'm looking forward to read Byakko Ibun although it's just a one-shot. I hoped it would be a new series. XD lol

Right Genbu finished, guess I should pick it up sometime.

Looking forward to the continuation.

Good for the fans~
I have known this Anime since forever, but was never a fan.
An Anime remake from the start would be cool.

When I read the title, I thought "she's going to continue the Suzaku series?? LET IT DIE!!". Then I read this and I am like, "okay this should be interesting".

Not fan of her manga. but good news for fans

The first Fushigi Yuugi series was ok to me, but Genbu Kaiden was definitely one of the best manga I've ever read!!! (I just hope it'll have an anime adaptation) So I'm going to try this new series, I hope it'll be as good as Genbu Kaiden or better. :)

After all these years she will continue this? If the wants and fans accept it.

Not sure what to think about this...
I mean, maybe it would be better to finish Arata Kangatari first, because I fear that it will be put on hiatus :/

Never seen or read about the series before. I might try it sometimes although I'm not a big fan of these type of manga.