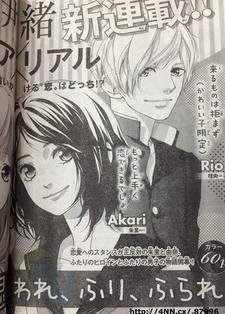 Io Sakisaka, mangaka of series Ao Haru Ride and Strobe Edge, is starting a new manga series titled Omoi, Omoware, Furi, Furare. The first chapter will be serialized in July's issue of shoujo magazine Bessatsu Margaret on June 13. The upcoming issue of the magazine, to be released on May 13, will include information on the premise of the new manga.

The tagline reads
Which is the love you will chase?

Synopsis
The story centers around Yuna and Akari who have two very different views of love: Yuna is someone who sees love as a dream and Akari is someone who is very realistic about her romance choices. Meanwhile, there are two boys, Kazuomi and Rio, who also have different views of love: Kazuomi's an airhead and doesn't understand the concept of love, while Rio grabs the opportunity when confessed to as long as the girl looks cute.

Sakisaka has been publishing manga under Shueisha's Margaret Comics label since 2001, with her single-volume Call My Name. Her most notable works are Strobe Edge, which ran from June 2007 to August 2010, and Ao Haru Ride, which ran from Jan 2011 to Feb 2015. Ao Haru Ride was adapted to a TV anime series in Summer 2014. After, all eight released volumes ranked 5th or higher on Oricon's Weekly Manga charts. Sakisaka also drew the original character designs for the Summer 2013 movie Hal.

Sign me up!! Obviously not gonna be able to read it unless it's licensed or fan translated. So what should I do with my life until this thing pops up in shelves. <3 Ao Haru Ride tho

Ao Haru Ride was great. The story characters, the morality and the nostalgic way it ended. The manga ended but I think they should make a second season of the anime. I am also curious about this new manga that is coming out because I liked very much Ao Haru Ride.

I'm sorry, but the only news I wanna hear is a season 2 announcement.

I really like Sakisaka's art style :)
Already like new characters!
I love AHR and SE, but...
I don't really sure I'm ready for another storm...
Maybe will read it when it will be finished.

It looks super great. I love manga like this, and 4 mains sound super interesting.

I'm excited! I loved AHR and Strobe Edge so much!!

Nice characters design. I love the dark haired girl but I hope the plot wont turn out to be mediocre like AHR. The characterization was hella poor with repetitive trope of tragic male lead and washy washy female lead combined with unnecessary love pentagon. The main reason I couldnt get into AHR(only occasionally read some pages and quickly put off by the main characters)

I just hope there wont be love triangle between the main four leads and the author can take time to actually develop her characters instead of putting random drama to move the plot.

I hope this doesn't turn out like the last two mangas. They were the same storyline, just with different characters.

plz switch it up a bit

Wow. Sounds like Ao Haru Ride v2.0 (times 8times the unnecessary drama) since there will be 4 MCs. Eeeeppp.

I'll give it a shot. I liked Ao Haru Ride (though it did irritate me at some points) a lot. I tried reading Strobe Edge for a bit, then stopped. I'm going to pick up Strobe Edge again and try this manga out once it comes out. I personally love Sakisaka Io's art style.

will definitely read! i love her art

Woah, I think she wants to do a Different style of art, huh. (But rio looks like a Combination of Andou and Kominato!)

Maybe, 'cause this Manga will fullfill Sakisaka's Lineups.
Well, AHR Anime is good. Let's hope for a Sequel.

I'm looking forward to it.

Here is a link to some of the magazine scans that list this title instead of Pure x Real.

Meh, why not.
Probably gonna read the manga just to see some bishounens, but if it turns good..
Well better for me xD