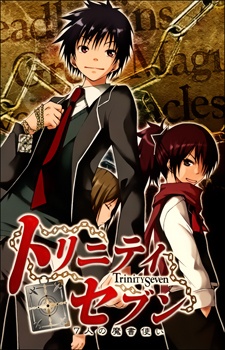 An announcement made on the official site for manga series Trinity Seven: 7-nin no Masho Tsukai reveals that a TV anime adaptation for the series is in the works.

The manga is written by Kenji Saitou and first began publishing in 2010.

Synopsis
Everyday is a normal day in the small town where Kasuga Arata lives. However, everything changed on the day of the Black Sun, and following it, a magician appears before him. The Black Sun caused the Breakdown Phenomenon which destroyed the town where he lives. Because of this, his normal life was artificially reconstructed by a Grimoire that his childhood friend had left. Just what is the purpose of the magician coming to the town? What will he do with the Grimoire's keepsake? (Source: jCafe24)

I picked up the manga on a recommendation from some dude on Mangahere just this February, started reading the first chapter skeptically, then blew through the next thirty some chapters within the next three hours.

Yes, it was that good. I can't wait to see when they come out with this, already added to plan to watch list. Ironic harem comedy at its best!

Woot!.. love the manga I hope they give it a proper adaptation.

Trinity seven has an awesome MC, hope they portray him right.

I wasn't really fan of what I read in the first chapters. However I'll be sure to give the anime a try.

well, not expect too much from generic ecchi harem fantasy

Wind_Sr said:
The pictures of the girls on the official site already have me mesmerized.

Seeing as the manga has a fairly high rating the story probably isn't too bad either. Will give this series a shot when it airs.

Same here, those girls *o*
I will definitely watch this!!!!!!
Many positive comments here made me excited!!!!

Sounds interesting, but the anime looks like it's going to have even more of a harem emphasis than the manga...

And I was wondering for so long why there was no anime for this awesome manga :D:D:D
I hope it will be aired this year =)

Anyway for a quick review, those people who like not-so-stereotypical harem (but still within stereotypical range) and love Highschool DxD where Issei does the strip attack, this is the show for you. Not so much of extreme ecchi level but expect lots of panty flashes and etc. Plot wise it's a little messy and has a lot of information dumps but its okay when you get used to the terms. And Arata the MC gets pretty OP by chapter 30+ of the manga, almost enough to incinerate anyone.

For a harem, it seems like this is getting a lot of positive feedback. I'll check it out!

-Touya said:
Confucius said:
Neat...but the manga is extremely slow.
Slow???Well yeah at start but since chapter 25-26 the plot moves at lightspeed.
Get ready for a Gentleman Issei for MC.

ANyway, been reading this and I guess it would be interesting too see an anime of it.

Both this and Terra Formars are getting anime adaptions? Today has been a good day.

The manga is interesting, and I enjoy it. I still keep up with the updates.

Like someone else on here said, I hope that A-1 Pictures won''t be the studio to pick this up. Though I have a bad feeling it will be.

I feel most people will like the main character Arata.

OOOO i remember reading the manga was pretty good hope the adaption good as well i cant remember properly but there aint that many chapter out there im sure probably gonna end up being a 12 episode anime!

Amiluhur said:
Dropped the manga at chap 17 since it's gotten really stale at the point. The protagonist Arata, in particular just pissed me off. Yes, he's funny and spouts cool lines, but in actual battles he's almost useless. Despite having the King's Power, he gets owned pretty quickly, either getting his power stolen or pretty much screws up his spells and leaves it to the girls to clean up his mess for him. It's okay at first, but that formula gets re-used frequently, which turns the series a little dull. And I feel that Arata is overrated as a protagonist - every characters in the series is making him out to be an awesome protagonist, but actually he ends up doing the same thing most generic harem protagonists do in the end, get beaten up by the girls for sexually harrassing them (in a comedic manner), screws up at crucial moments, go to training and make a comeback. Formulaic, I suppose. Plus he may look like he has a harem, but he actually does nothing with them at all. I'll be surprised if he realizes that Lilith and a few of the other girls like him (there's one girl who likes him but he just writes her off as a sister, it's the heroine whose magic powers is dreams or something).

Oh, and if the mangaka thinks that by simply throwing random, obnoxious power-up at the heat of the battle on pretty much every goddamn single action scenes make his work look cooler, i feel that he drank too much Lapin beer every the night.

Other than that, it's pretty much the same old story of him helping girls and girls falling for him, plus the typical violent jealousy but outright denial (WHAM! "I'm hitting you because....because you're a pervert and not because I like you or I'm jealous, okay? Don't misunderstand me!")

It's a shame you don't like him like most of the readers do but I think it's kind of refreshing to say the least to have a protag like that once in a while. I think it is good for the manga to follow cliche route of battle shounen manga and not taking itself too seriously because I want to see the harem developed, if it focus too much of the story the harem will stalled and as I said before it is the highest selling point of the story after all..

Ecchi and Harem...eh, i guess i will still check it out, since people i know that read it are loving it.Still tho, i heard ecchi is strong with this one, and im not really into pointless ecchi scenes, so i might drop it rather fast.Well, we'll see.


Shuryukan said:
Thought i read yamada and the 7 witches at first.

*cries*
That would be too awesome D:

Another one of those in my list of manga series I hope would be animated, alongside Mahouka Koukou no Rettousei, Black Bullet, and Baby Steps. I hope Ahiru no Sora is next!

All you expect from a series like this is that breasts jiggle nicely and there are no beams of light...