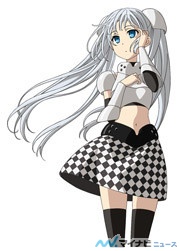 It has been announced that an original TV anime series titled "Miss Monochrome" will start airing from October. The original character design came from seiyuu Horie Yui. In March 2012, she first used the "Miss Monochrome" character as a 3D virtual singer to sing her songs at her concert "Horie Yui wo Meguru Bouken III ~Secret Mission Tour~". Later, the character appeared in a range of merchandise as well as in the social network game "Girlfriend (Beta)".

According to the setting, Miss Monochrome loves only the monochrome style, dislikes all kinds of color, and always dreams about changing the world into her favorite monochrome color.

The anime is slated to be directed by Iwasaki Yoshiaki. Other staff and cast information has not been disclosed yet.

The casts looks nice! All of them are pretty much veteran. Are we expecting another characters?

If we keep it consistent and put all surname first, the list should be:

Miss Monochrome club is up and running....

Darn, I was expecting at least 12 minutes for this anime, but I'll still watch it.

Confirmed to be a 5 minute short.

I expected a typical mahou shoujo design, but this looks very shounen-ish. I do not have very high hopes for a TV-only (No manga) Anime, but I will give this one a chance.

I am excited for the original songs that Yui Horie will be singing for this anime.

This looks like a lot of fun. It would be fantastic if it was a full anime but I feel it might be a short.

I'm a sucker for everything Hocchan does, so I'm definitely in.

Short series or not. Though probably it will be short I'm going to watch this out of curiosity :)

The only thing I can think about this show is:

someone tell Yui Horie to sing that please

I'm curious. Will check this out xD

krisalice85 said:
Pretty interesting...I'll try this one to see how good it will be and I'm also a fan of Horie Yui...

I love Horie Yui's voice when she is playing a character. I tend to like a lot of characters that are voiced by her.

Pretty interesting...I'll try this one to see how good it will be and I'm also a fan of Horie Yui...

As long as it isn't one of those three to five minute episode long anime shows, and the graphics looking appealing like some of the artwork I have seen based on that girl, then me will so be watching this.

The character looks awesome. It's Yui, so it's definitely going on my list.

I hope they turn it into a full fledged series because the character looks awesome.