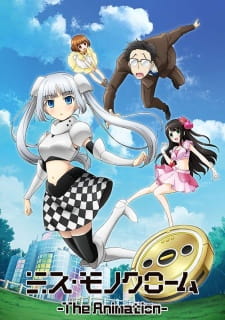 This sequel will be the third short anime to run within the previously announced 30-minute Ultra Super Anime Time block, along with Wakaba*Girl and Wooser no Sono Higurashi: Mugen-hen. The block will begin airing on July 3.

Miss Monochrome is an original anime series based on the character designed by Yui Horie. In March 2012, the seiyuu used the Miss Monochrome character as a 3D virtual singer for one of her concerts. The character then went on to appear in a range of merchandise, along with the SNS game Girlfriend (Kari) and its subsequent TV anime adaptation. She also made a cameo appearance in Shounen Hollywood: Holly Stage for 49.

The first season of Miss Monochrome aired in Fall 2013. It completed at 13 episodes, with each episode approximately 4 minutes long.

It's a good news :) I'm looking forword to this season :)

I'll probably check it out. The first season wasn't great, but it was still a decent watch.

I didn't mind the first season, but that was only because it was 4 minutes long. I'm not sure MM can make it longer without making it boring as fuck.

I watched the first season yesterday and it wasn't that good. The only reason I'll be watching season two is because it's a short.

Not exactly surprising but can't say I was expecting it. I'll watch, not like it'll take my time at four minutes a pop. If they change the ED though I'm going to be pretty pissed.

wasn't expecting it at all.

Finally, I need more Monochrome in my life :)

Oh myyy. I can't take all these good news.

sweet I love short anime <3 and this one was adorable!!

I Guess I tried to watch the First Season.

A pleasant surprise, I guess.
Hopefully the ED will be as good as the first season.

Alongside with Teekyuu this is one of my favourite source for quick weekly laughs. =D

Nice, this was one of my favourite shorts.

why not? First season wasn't too bad.

First season was kinda fun so I might watch this one.

I always believed this would happen. Woot~