by dtshyk
Aug 24, 2012 2:50 AM | 90 Comments
According to Dengeki Daioh magazine, P.A. Works' original anime "Nagi no Asukara" was announced. Details of the new anime will be revealed at a live event Dengeki 20th Anniversary Festival to be held on October 20th.

Nagi no Asukara on MAL

The latest news is that it will have 26 episodes !!

symbv said:
There are NINE volumes for the BD/DVD. It seems that the series is a 2-cour series.
Hell yes.

There are NINE volumes for the BD/DVD. It seems that the series is a 2-cour series.


Amiluhur said:
BTW, is Buriki really the one handling the character designs? They don't look like his style at all
Buriki is not really the person who handles the character design position. Character design is by Ishii Yurko. Buriko is credited with Original Character Concept, which is more like he made a number of basic sketches and then some other people develop on it so the end results could vary from the original design, particularly since it is an original work, unlike Haganai where Buriki's illustrations form a clear reference and viewers can compare and see the difference.

I sincerely hope it's not going to be another cheesy, over the top melodrama like the ones in AnoHana.

BTW, is Buriki really the one handling the character designs? They don't look like his style at all

^ The anime radio stations are releasing the latest batch of anime OP's !! Yay!

Just saw the trailer and I´m definitely gonna watch it when it comes out. The trailer looked pretty amazing!

PA works is delivering nice scenery and visuals which is quite common for them. I'm liking the flying fish thing they got going on.

Wow, I hope this is as good as Tari Tari or HanaIro. The "image" song by Ray is so good though here. HanaKana being one of the main seiyuu also helps, lol.


It's about a world where there are "sea-dwellers" and "land-dwellers". The sea dwellers obviously live in the sea just like regular humans live on land, but there is some conflict between the two. The sea school is closed and the sea-dwellers have to go to the land-dweller's school. On her way to school the main heroine is caught by a fishing net and this leads to an encounter with who I assume is the other main male character.


I got this information from the promotional manga that came out recently. 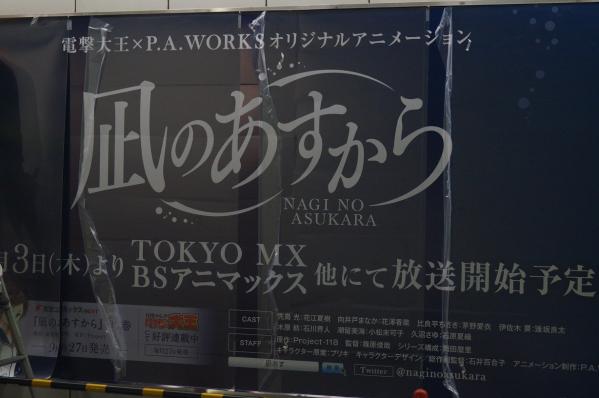 Finally, some news. Kinda have expectations for this one :D

Nagi no Asakura is now confirmed to air from this October (i.e. 2013 Fall Season).

A lot of people already commented about the staffs, I do agree with most. I look forward to this series. Though, if I'm bothered with something it'll have to be the "characters".

Besides the 2 main: Mukaido Manaka and Sakishima Hikari

The other six listed are characters from the light novel "Mahouka Koukou no Rettousei" and those VAs are the ones who voiced them on the LN's drama CD. I'm confused... @.@

Burikis character designs don't belong to PA works... they give everything is weird gradient.

Best looking Buriki is still denpa onna and that was made by shaft (akiyuki shinbo). I doubt PA does a good job here with these character designs.
Their backgrounds always look amazing but character designs are kinda too slick and glossy

Hey people, if you like this chara-designer, just check the manga Tokage No Ou, it's fricking amazing ;D

Those reasons are enough for watching this. Thou sometimes P.A. Works' plot isn't that special, but their visual never fails to make me eyegasm, so why not watch this? :D