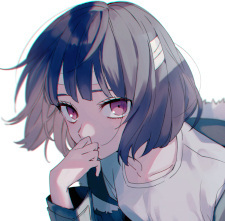 Safeanew Jul 12, 2020 5:54 AM
Society do not need to tell people directly: "you must enjoy!".
Instead it comes as injunctions from one's superego, as a gut feeling: "you must enjoy!".
The superego injuction comes with pangs of guilt, that often tell contradictory stories of what one is doing wrong.
It is because the guilt comes from one not following one's true desire, that the superego injunction demands more and more.

To free oneself, one have to accept the guilt, but not the false stories, letting the guilt be meaningless as long as possible.
Besides guilt one also feels anxiety, as anxiety also come from one's true desire.

Gabbye May 29, 2020 1:38 PM
Oh dang, your tastes are interesting to say the least.
I may disagree strongly with a lot of your scores, but it is what it is.

AestheticOnion Apr 30, 2020 4:00 AM
The show does follow the manga to a great extent, but feels unsure of how to properly adapt from the source material. The plot remains cohesive, sure, but the visuals feels uncomfortably transitioned from the paneling structure. Not to the level of something like Kuzu no Honkai, but it feels stale and lifeless. The scenes lack atmosphere, the editing feels rushed and the camerawork is rather boring. It delivers everything it's supposed to, but there is no magic in it. Normally I wouldn't rant to much about that when talking about an average show, but I don't consider Yesterday to be an average manga, or anything close to that for that matter.
Also there might even be some details that the show just didn't put that much attention to, such as Rikou's photographhy. It seems like there was so little emphasis on the fact that he never takes pictures of people that when he takes a picture of Haru at the end of episode 2 we get a pay-off with no set-up, and the whole thing feels unearned.

From the two episodes I've seen, i'd say it IS a good show regardless, but it doesn't hold up to the manga, at least not thus far. There's a lot more detail it should've payed attention to since it decided to completely follow the manga. I, myself, ain't really a fan of manga-to-anime carbon copies and i think every good adaptation should add something to the source material, sort of as a new take on it. Half-assing a copy-paste take is not a way to go.