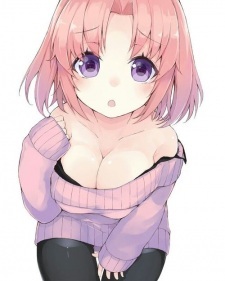 SMtsundere Aug 11, 9:41 AM
I am super late to responding to this, but thank you for accepting my friend request!
I hope life is treating you well and the anime world has been a great outlet for you.
I am personally pretty happy with this anime season, but there are also a few new seasons of series I have been looking forward to, Made in Abyss for example.

nice to meet you!
hope you are well

thanks for accepting my FR😊

How are you doing?

Kingofglory77 Jun 23, 8:00 AM
Kaguya sama, Spy X Family, ya boy kongming, my dress up darling a few others. Nothing too crazy has came out yet, i think in the month of july a ton of bangers are coming out.

Olivi125 Jun 23, 7:48 AM
me with doki doki literature club:
xD</3
:))
Well it wasn't thaaaat bad, but then again i say that about my past as well so it's v subjective uwu
I'm presenting tomorrow Xcc i'm so nervous omg i'm also writing chemics before that and that's my absolute worst subject so yk,, that doesn't help :'D but thank you so much<33 i'll tell you how it went uwu
Congrats on feeling better again :DD<333!!
Do you like your new job? :)
oh it's a good thing really, i'm only feeling a bit uh weird about where we live now i still don't really feel comfortable with that but oh well, can't really do anything about that
i mean i could go live with dad but i do not plan on doing that lmao
aww thank you i appreciate that :)<3
I hope you've been able to enjoy yourself lately as well? :)

CuteChaff3503 Jun 22, 8:20 AM
Haven't found anything good since Koukaku Kidoutai: SAC_2045 Season 2 ;( just been re-watching stuff sadly. What about you? Have you watched anything in between work?

Olivi125 Jun 17, 3:27 PM
Oh i don't know if I told you since I'm pretty sure it happened around the time we stopped chatting but I started going to therapy there and my parents separated and mom and I moved away lol
To add that on casually lmao🥰

Olivi125 Jun 17, 3:20 PM
Ahhhh heyyy<3333 so glad to have you back 🤧🤧💞💞💞
Do you still have Genshin Impact? Wanna share UIDs? xD
Bro soooooo much happened I kid you not my life literally turned upside down lmao
I'm not sure if you want to hear this it's really a lot of information so yk you don't have to care about this and respond and read everything but I'm just glad you're here and I wanna at least tell you :)
I don't even know where to start omg ok so i- I'll give you all the major information I can think of because a LOT happened and I made the best decision of my life and yeah just, I turned into an entirely different person lol :)
Soooo let's start with the summer holidays last year, about half a year later from when we stopped chatting 🤧
Sooo I had the feeling that I was finally going to feel okay again as I felt I had slowly but surely recovered from my mental illness, stress response syndrome, and I thought this for approximately exactly 2 weeks. And then the weekend rolled around, I stayed home alone through the night for the first time ever and it was not a pleasureable experience since I decided to watch horror movie summaries the whole day lmao and theeeen hail cracked our cars windshield while we were driving and it was generally a very tormenting experience and from that weekend on my ENTIRE base emotion that I had developed to be anger for yeaaaars now, switched to fear :D funny stuff. I was now paranoid of natural catastrophes and some unfathomable supernatural stuff as well as yk intruders and pain and war ( this proved to be a challenge when Russia started fucking invading Ukraine lmao uh I'm better rn tho </3 ) and getting killed suddenly and I was just generally paranoid lol :D
Oki now then let's skip to after the summer holidays. I had to repeat 9th grade so I'm sitting in this new classroom for approximately ~2 months until I decide to switch classes (best decision I have ever made mind you). I was so lucky to have it work out for me, because the class I chose for myself is the one I am still in now and it's just such a healthy environment bro. There is no judgement. And they're all so sweet I love this class so much. Now, repeating and also switching classes has given me and also returned so many friends it's unfathomable ( for me, considering I had been the loneliest piece of shit for years on end lol) and I just generally feel better than I've felt in years :) now regarding recent information, I have holidays rn but I only have 2 days left (pain) and the friday before the holidays we had a kind of prom ball ( they have little partys for the 5th - 8th graders and then balls for the 9th - 12th graders ) and it was a genuinely nice experience, I got to meet and talk to some people that I rarely talk to and a friend from elementary school that I hadn't talked to in years talked to me so it was really cool :) I wore a suit hehe <3 then in the middle of the holidays I got my wisdom teeth pulled XC bro i. I died. No I didn't but god I'm so proud of pulling through that, because I decided to do it without anasthesia and instead just a benumbnent of the area but if I had to do that again I'd deffo do it with anasthesia lmao that was stressful,, and the pain started setting in just a few minutes after the procedure and they didn't have pain killers there and just told us to go buy some and that was a 30 MINUTE RIDE OF TORMENT AND TORTURE LMAO😭🤚 yeah that was uh uncomfortable,, but other than that it was considerably fine :p
Now after the holidays await all the last class tests and shit all piled on top of each other eh
But the worst is french presentation next week,, I'm presenting Miraculous Ladybug 🐞 lul xD wish me luck :))

Ok now I want to hear what's happened in your life :)) doesn't matter if nothing big happened, I'm interested okey? :)