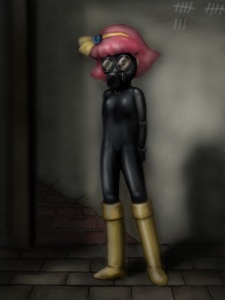 Paraon Jul 4, 6:21 PM
I'm not, just socially repressed, so I put off replying to people online because it causes me irrational stress. Except when I'm drunk, right now. Then I don't feel stress, so I can talk to people more freely, including those on the interwebs.
You've been asking me all those interesting questions, about what I think about X or sth. So I think I have to take and initiative and ask, what's you opinion on 70s anime? Did you saw much of it? Do you like any of it? Of course we're excluding Gundam because of course.

Paraon Jul 4, 6:17 PM
So I have to prove my oldfag cred, huh? Let's see, from the things Oobari had a some larger involvement with I have seen Bubblegum Crisis, Detonator Orgun (finished this one quite recently, it was alright, better on a conceptual/visual than the "plot" level, but I guess that's the standard for those 80s OVAs, speaking of which), Dangaioh (it's so fucking gougers and well animated I can't believe how it can be real, but the plot is do dull and boring I haven;t watched the 3rd ep bc it didn't have an HD scan so why bother?), the precursor to that, Iczer 1 (oh god, that title is so funny but I cannot explaining it. about the show itself, he was only animation director in ep 2 and 3, but you can feel the change,but maybe that's just because I've seen a graphic that explicitly compared the mecha design in first ep to the 2 ep, with caption '2 ep is a Oobari episode", idk) Fatal Fury: The Movie (very horny, very good, probably my favorite of his directorial works).
Ofc, I've seen some other shows where he only did animation of less noticeable animation directing. And, uhhh... I'm not sure what that was meant to accomplish. That I have an idea of the Oobari's style, that for sure. But definelty I'm far for seeing most of his work. And I know I have to work on that.
And that Gridman controversy where they kinda copied his storyboard almost entirely is a really interesting case of "where homage ends and plagiarism begins. There's a really interesting and nuanced discussion to be had about this, although I think I'm incapable of being a part of it.
And and, speainkg of his OP work, Dragonar OP is GOATed, but the show itself seems hella bad.

Paraon Jun 26, 5:59 PM
You know what? I'm willing to watch Angel Blade just because the God of Mecha Oobari-sensei directed it.

Fluggyboi Jun 21, 1:52 PM
i see we understand each other lol

Fluggyboi Jun 21, 1:08 PM
yeah but i dont think this is good evidence for a reference or hommage lol, its a fairly common scene with the way its shot creating suspense.

Fluggyboi Jun 21, 8:08 AM
uuuuuuh ok?
why are you sending me this video exactly?

Paraon Jun 19, 6:23 PM
I'm not sure what you exactly mean but in my (and his) country of Poland (woohoo!), ran a bit of anime. Certainly less than I would like. But for example, the ones I grew up with were Bakugan (probably never heard of it) and Pokemon, Diamond and Pearl, to be specific (that's why I'm still nostalgic about that generation, even though I've never played those particular games, but it still led me to trying out more Japanese games, by buying a Nintendo 3DS). I also remember a bits of Bayblade. As for the older stuff, from the 90s and early 2000s, I know Sailor Moon was really popular, and also shounen like Shaman King. And the old *old* stuff, my 50yo father used to watch Gatchaman aka Battle of the Planets aka G-Force as a kid.
And the Shafot guy. He's really a military Otaku in the sense he plays War Thunder a lot. And knows about military history also. He showed me pretty cool movie about the creation of American military transporter, which you would think shouldn't be exciting at all, but for the contrary, it was really interesting (and funny).

Paraon Jun 15, 9:10 AM
We're online buddies, talk with each other on facebook and stuff. He's can be pretty abrasive (and is a bit of military otaku), but is a cool guy overall. The story of how we met online is so weird tho. We both were commenting under ~100 views/epsisode Let'sPlat series, and he checked out one of my shitty early video (that's now unlisted) and reached to me through my steam account I linked in my YT profile and after that we somehow started chatting.

Fluggyboi Jun 10, 7:40 AM
ooooh you confused me a lot at first hahaha

Paraon Jun 9, 12:27 PM
He certainly is an... fascinating fellow. I honestly wish I had the same level of conviction as him.

Paraon Jun 8, 8:15 AM
actually when I googled it, the first thing that came up was "Cognitive behavioral therapy" but I guess cock and ball torture also makes sense, but I'm not sure if I'm into that. I'm more of "oh, god I just don't want to die a virgin" kind of guy.
All Comments