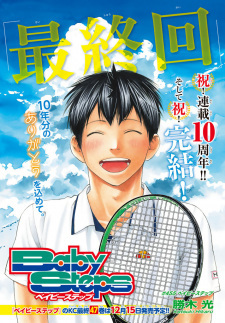 RAMYOZI May 11, 4:52 PM
Hi! i was planning on starting Baby Steps soon and i just found out the manga ending was rushed (bad? idk). i'm not asking for spoilers but i just wanted to know if the ending was somewhat satisfactory to you or not.

ONLY watching good shit (no trash)

style over substance is cool but ur probably a meathead

women with glasses are hot FRRRRR

Soulsfear Jan 31, 3:12 AM
Well,as long as it isn't harem and has only one obvious romantic interest it always turns out that way in the mag I guess.That's why DomeNaKano kept going back and forth between the girls so it could milk money without much effort on the complex side of things,it was MCs decision that kept it complex on surface and dragging it for so long..and then the current one KanoKari...it has just no progress and is trying to be slice of life simulator in the recent arc.
Well,Baby Steps wasn't that big of a thing to me..apart from the later stages when MC was estabilished so I never felt like nothing was really missing but it has to do with the usage of both MCs why it had to end the way it ended where it could possibly go for way longer if he introduced one extra female rival or something (or just used Marcia later on for that or that's what editor would want him to try out).

Soulsfear Jan 25, 2:10 AM
I see..I also respect how got back to roots recently with the current match up in the manga but at the same time it could have only 2 years max left in the tank..while Ippo kinda took the more borderline seinen approach with how Ippo himself is used in the manga now and Takamura was the true MC ever since Ippo left the active boxing.Maybe the fact that it wasn't using both male and female MC to its full indended potential that could overcome DnA back then was a problem in there but you never know in Kodansha...if author planned to make it as long as YowaPeda is going to be then it's a shame that it didn't I guess.
On the other side look at PoT..it's been going since for almost 23 years with that one year break in 2008 to prepare for the sequel...and now it went for quarter of year break in late autumn (possibly to be involved in the upcoming anniversary anime sequel).

Soulsfear Jan 23, 9:40 AM
Hard to say what was going on at that time..if author decided to do it due to DnA sequel still pumping up the huge numbers where sequels usually aren't strong..even now it's still like TOP5 in WSM after all these years.
Anime was fine regarding the budget and people that were involved in it but that's it..you had to dig into manga if you wanted more of your main duo.

Soulsfear Jan 22, 9:41 AM
Anime you mean? Well,hard to say since it was actually quite decent one by the studio that handled it but DnA and YowaPeda just did way better I guess.

mushimk Mar 8, 2021 12:15 PM
I agree on your analysis for diamond no ace (for the most part), and that's the one thing I tried to emphasize on my review. Unfortunately, to me this anime exactly fails to give enough value to this one strongest point you mentionned : the anime swiftly relied very eagerly on flashbacks and story filler moves that crash the anime in its whole (at least for me).

Consider this : I end up fast-forwarding some diamond no ace scenes while I never had to fast-forward any haikyuu scenes. To me, that is clearly showing diamond no ace failure, as a supposedly entertaining anime. Hence, the difference in rating. Now I didn't remember get a 8 for haikyuu (I thought I put a 7) so maybe I should reconsider this.

From these two anyway, I still prefer One Outs very much.

Soulsfear Feb 26, 2021 3:43 AM
With Ecchi it's even more dry..unless there's something that gives you a feeling that would be as as a good one/accetable one by late 00s/early 10s starndarts then it's no-go.I would say that the Ecchi era ended when To LOVE Ru Darkness manga ended..or when High School DxD LN ended (since they're classics at this point when it comes to their original source material).

Well,when it comes to the aliens/monsters/tentacles ..yes.Then there's the NTR or hypnosis one which is alright..if the female character deserves it since she's so broken to begin with..if you get the meaning xD
With the anime original ending they pulling out more and more..slowly but let's say - yes..I wonder if we get it just like with with possible S3/S4 ending being for once better than the manga ending..

I mean..it doesn't help than nowdays there aren't many memoriable ones..and if they're,it's mostly the ''same'' ones and the ones that stand out comes out like 3-5 per year really.

Well,updating..ye,regarding some of the new h*ntai stuff sure.. though some of the hardcore rapes I mostly tend to avoid in the past years (same with f*tanari).
Beastars..yes.Probably the best anime that also benefits from the alternations they do compared to the manga..basically it feels like fresh experience once again despite the core elements still to be found (and that's to develop Louis and Legoshi).

Actually, Chihayafuru was the first sport anime I found. Something about the artstyle gripped me, read the synopsis and decided to give it a chance. I fell in love with it during the first five episodes, not in the least because the asthetics of the show perfectly much those of karuta itself. Nothing like a show that brings out the joy of the sport itself, hm (that’s why I love Daiya too)?

He certainly has. It was high time for the relationship between the main characters to start moving, and it was handled really well. I think Taichi has been my favourite character from the beginning – using his smarts and will to overcome his weaknesses in the one area of life he didn’t excel in, pursuing it both for his own personal development and because of Chihaya. I’m really looking forward to what comes next, but I think I will wait for the anime – for now at least.

Soulsfear Feb 15, 2021 4:55 AM
Sure..though the current season them having two seasonals (20 episodes in total) can still be seen on the CGI usage they decided to do in Hataraku Saibou 2..so the areas won't feel too empty regarding the amount of stuff on screen (mainly the red cells people).

Soulsfear Feb 11, 2021 2:51 PM
Yup..at least it was announced like 6-7 before the actual actual ''recap'' ..even with the delay they either didn't finish the script for the whole anime original cour in anime or just they need the extra time to animte properly last 1 or 2 episodes..whatever is the case people are still going to be sour about how S2 turned out.

Hmm..I see.If I didn't know about MAL for almost 12 years already,I would maybe've moved to anilist at some point but..that would mean I would just put probably the ongoing stuff there,if nothing else..my list is already huge as it is..and the amount of h*ntai that fills that is just..nah xD

Soulsfear Feb 7, 2021 3:56 AM
..okay..Well,being only alright to you is no big deal really..since the 1st cour could've been better but it still did great job despite its limitations (it should've been 15 eps for better immersion at the very least) but if anime only watchers loved it to that extent already,then the more hurts the way S2 got revamped...it's all the boost the manga sales one last time for manga that ended last June..xD
Ye...I loved the feel of Sun-Ken Rock but eventually it fell apart..or rather there was nothing groundbreaking anymore.It way it kept developing the goals or whatever else just aged fast..by the time we could see the finish line,it just didn't have the major impact as it had at its prime earlier on to me.Kinda had the Gantz effect feel to me when it eventually just ''froze'' my emotions..because of some of the character usage/disposal.

Soulsfear Feb 6, 2021 4:05 AM
I see.Neverland 2 is taking influences from Crunchyroll and their ways of handling the webtoons..but this time it's WSJ product that takes the ''beating'',which is by no means that terrible..since the last 50 chapters of Neverland manga are the most forgetable ones in the series anyway.Dr. Stone is fine..the pacing and progression is always so forward which is why the peaks it has always lasts only a moment for me..kinda the same with the usage of the characters majority of the time..at least the stuff after USA is kinda amusing since the forward pacing here works out the most here.Gen is one of my favs..Senku,he looks like the casual Boichi MC that absorbed the best ouf of his previous characters and this is what we got which is a good thing because you don't get a feeling that he's going to cloud his vision with uneeded things..unlike his previous MC characters.
Anilist hmm..isn't it that one connected with AniChart which I also follow for quite some time along with LiveChart.
All Comments