Looks like it's main story is over, but the serialization is still ongoing with a side-story arc. These side-story chapters are likely to be included in volume 12, so I think it'd be better to keep its status publishing for a while more.

rosedarkling Nov 9, 2017 3:15 PM
Ah, good advice. Thank you for the reminder about adding the entries. And I think I found you on KKrais's profile, who I found is the one subbing MahoYome Specials for those of us who don't understand Japanese. :)

MARISA-KAITEN Nov 9, 2017 2:26 AM
I added a few characters and Miyuki Sawashiro, but to be honest, there just aren't that many characters from Japanese media that have made much of an impact on me. Also, I don't really want to use the manga and characters sections as spillover for my favorite anime, but I get why you suggested it - I mean, it's not like I'm using the space anyway, right?

Can't say I've ever gotten many recommendations - maybe 10-15 in total all time from what I can remember, and none of them were from people on this site (unless you count Nyron's reviews pushing me to watch Scryed and undrop Symphogear).

Most were from scanlators & fansubbers I used to work with, but we don't really talk anymore, and I've never really been the type to ask around. If you wanted to recommend something, though, have at it.

Eriaz Feb 14, 2016 7:02 AM
Yep, Bokudake is not a series to be watched while waiting each week for the next eps, the cliffhanger is so terrifying. Have you considered reading the manga?
As for Dimension-W, what do you think about it? overall it's a good show to watch, but is lacking something, I feel like the settings and plot are so good but with the settings and plot like this it could be better, or maybe I'm just being prejudice about it haha, that piece-of-junk is so cute though.
WOW! I like the art of RWBY! never heard of this anime can you believe that? haha, anyway I'll try watching it! my expectations are high on this >w<

what anime do you watch this season? I am watching several titles but for me the top five are: Bokudake, Hai to Gensou, Konosuba, Shouwa, Ajin 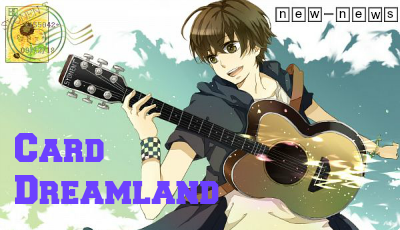 Welcome to Card Dreamland's newsletter! We will be sending out newsletters for new events, activities, goals that have been reached, and much more!

Thanks for taking the time for reading this!
All Comments