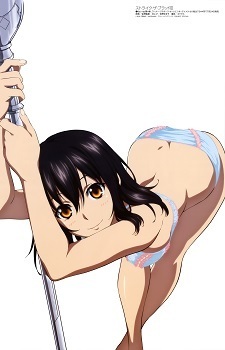 HaXXspetten Jan 9, 2020 10:32 AM
As far as I recall the anime stopped at volume 14 of Darkness and there are 18 in total so yeah, that by itself is a bit weird because there wasn't much left to cover. I guess they felt it wasn't worth the effort to continue after the manga finished publishing but still

HaXXspetten Jan 9, 2020 9:37 AM
Yeah I don't know all the details about the situation regarding what exactly he could and couldn't do with Haruna. Just the general gist of it

It always triggered me that he went off to doing the manga for FranXX, partially because I didn't like the anime anyway but more so because as long as he's doing that, he's most certainly not continuing TLR. I do remember seeing hints since Darkness ended every once in a while that Yabuki may want to return to the franchise eventually but there was never any confirmation regarding in what sense. Would it be another true sequel if so or some spin-off or something else? I don't know. Either way I'd take any of those options over FranXX but considering that Darkness' ending is undoubtedly its most unsatisfying part (since it's all still very open-ended), I definitely think it needs a continuation still. Not so much because I love the series but more so just because the story deserves a more conclusive ending than what it currently has