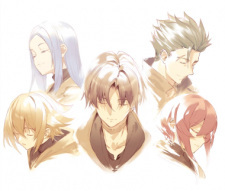 AbsurdTurk Sep 2, 11:48 AM
Violet is one of your favorite characters? Interesting. May I ask what her appeal is to you? I'm not trying to attack you; I'm genuinely curious.

QuantumVoid Aug 11, 12:04 PM
I can't quite remember where i saw it honestly. It may have been there when i wrote the comment, though i can't find it now hahaha.

QuantumVoid Jul 24, 4:03 PM
Nice to meet you too, holder of the Voyager Golden Record.

flowstate Jul 24, 8:16 AM
Hey there, hope all is well! I've just taken some time to get back into my often neglected comments section, so apologies on that!

I've got to say, your description of Gundam SEED actually sold me on the show, and it's officially on my PTW and one of the shows I might dive into sooner than later. Thanks for that! I decided to hop into Full Metal Panic! first though, since I've heard good things and it seems interesting and balanced to me.

Yes, you seem to have come a long way in your introspective meanderings of the world, wars and humanity. I'm so glad to hear that you've been influenced to have a better understanding of the truth that lies beneath our species, and the value of life in general.

I haven't heard of Zaregoto, but it seems quite interesting, along with your take on it. Thanks for sharing your thoughts on all that with me, btw.

As for me, I agree. Creation in general is the embodiment of our capabilities as humans, and I believe we should all strive to create something of value more than we consume, if possible.

So, anime that has changed me? There are many, and some simply touch on more broad principles that have been told in story form since the dawn of time, but I'll expand on a couple of my favorites.

One one front, we have the practice of and the creation of music. Hibike Euphonium got me thinking about how I used to play instruments once, and then Nodame Cantabile sealed the deal and I became convinced that I needed to learn to play the piano so that I could, eventually, create my own pieces, transmuting my emotion into a musical experience that, hopefully some day, someone would be able to understand and relate to. That's a "lighter" way that anime has influenced my life and made an impact, for sure.

Onto the heavier side. I will never tire of stories that tell of perseverance, overcoming the darkness in favor of the light of future possibility, etc. When they're done well, they get recognition from me for life. Little Witch Academia does this, which is, I believe, the original forum you commented about so I'll refrain from rambling on about that too much. I will say though, that when Akko finds one of these seven words on her journey, the one called "Phaidoari Afairrynghor", which translated to "You don't get that which you dream of, but what you work hard for" resonated with me. What's more is that Akko was the living embodiment of this principle, backing up all of her dreams with action, and it just... became wind beneath my wings, so to speak. Crazy how a show can do that.

One more was touched upon in Jojo part 5. A few of the characters speak of "resolve" a number of times through the season. They speak of how when Giorno had it and demonstrated it, it became contagious and was passed onto them. It was spoken about as such "The only ones who can open up a path in the darkness are the ones with resolve", but at key, crucial moments when they're on the cusp of defeat. Giorno also embodied true leadership and empathy. The show finishes with these principles baked into the finale, but it's easy to miss. Essentially, fate is a big topic in the show as well. The "gang" of protagonists ends up staying true to their values and decide to walk a very difficult path ahead of them, but one they know is true and right. The final "boss", who they've been chasing the entire show, has a stand ability that allows him to see 10 seconds into the future, and basically "dodge fate", essentially running away from the outcome and trying to control every element of his life. The main protagonist in the gang has a stand that allows him to essentially see fate, and inevitably face it head on, which is also, ironically what the gang has been doing the entire time on an individual level. There is a dichotomy here, highlighting two separate mindsets. The one mindset highlighted running away from one's reality, and it ended with miserable defeat; the other highlighted the gang facing their reality, going through hell sometimes, but never running away from their problems, and eventually leaving a massive impact because of that through embodying resolve during the toughest of times.

I know that was quite the ramble, and like yourself I really could go on, but I digress. Like yourself, I aim to find shows that carry the weight of a deeper meaning that can impact me and help align my head to where I know deep down it needs to be.

I truly am grateful for this medium and my favorite creators. I love that you plan on writing a work of fiction yourself. I'd be lying if I said I didn't feel inspired to do the same at times!

BannedAkko Jul 1, 12:19 PM
Thanks for the add! Nice profile I like the layout.

You said previously your favorite was Shinobu, did it change during the rewatch?

So we’re both rewatching haha
I’m currently rewatching Nise, trying to recap the first season before starting second season for the first time. The rewatch, as you said, is definitely a better experience even though I still highly enjoyed it the first time.

maybe you’re cursed by the devil

Ephemerisu Jun 17, 8:51 AM
Thank you for pointing it out, I'll rewrite it and I'll make it more clear.

Btw, I started watching Glass no Kamen and I'm really enjoying it so far. Thanks for the recommendation :)