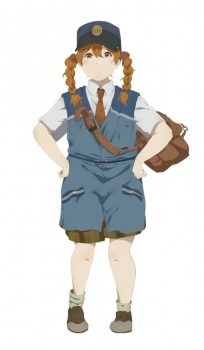 sockerdricka Yesterday, 1:12 PM
I spent Christmas with my family, new years in a hotel.

How's the new year treating you? You doing OK?

We finally have a "real" winter in Stockholm (well, not quite, but kind of). It's so fucking beautiful when everything is covered in white.
I was born in the north so I kind of expect more snow and cold weather. And as far as I can remember we used to have it down here too, what fucks me up is I have a bad memory so I don't really remember the weather from past winters but I have the distinct feeling it used to be more "real winter" than it has been later years.. global warming or just a fluke?

CHC Jan 21, 6:54 AM
Yeah I couldn't keep my attention half way through Beladonna neither.. I think it's too long for its own good. But I really liked its aesthetic. If you liked Beladonna's artstyle but found the story and the length of it tedious, perhaps something like 1001 Nights might interest you.

l'art pour l'art: yeah exactly. I think one of the unique charm of art is that it helps us to look at things with an intensified attention, which is something enjoyable at it own right. Apart from being a formalist I do like good anime drama too. But good anime scriptwriter is such a rarity, so recently I rarely watch anime expecting a good, engrossing plot..

CHC Jan 6, 12:57 PM
Sometime I do like watching show has a strong, intriguing theme that grabs my attention intellectually, but there is a lot of other shows I rated highly simply because of the sensation it offers. I love Koushoku Ichidai Otoko (The Sensualist) because it is the best attempt I've seen to make animation in an Ukiyo-e style. Its use of color and shamisen music is highly stylised yet at the same time it is so highly restrained that it allows enough space for me to comtemplate on and immerse myself in the fanstinating world it depicts (unlike other Ukiyo-e inspired anime like Mononoke which tries very hard to tell the viewer what they should be paying attention to and what plot point and information they should be thinking about). To me the point of animation works like this is really just about comtemplating the aesthetic experience itself. The story is more like a framework for bringing out the dreamlike world of Edo Japan under Ukiyo-e's imagination. It's just like how you can comtemplate on a beautiful painting, listening to a piece of classical music, without having the question "what is the point of it?" ever come to your mind. Or, it is like occassionally when you're on your way home back from work, you incidentally look to the sky and is caught off guard by the beauty of the sunset and for a moment you completely forgot about all the worldly worries that was occupying you a moment ago. You simply think of nothing and lost yourself in the sight of it. The beautiful sight of the sunset doesn't have a "point". It is precisely it's pointlessness that it's able to temporarily elevate ourselves from the mundane reality that preoccupies us. Admittedly hardly anyone would watch a film or an anime in this way, 'cause completative media is really really rare these days... The only time people would even pay attention to natural beauty, let alone artistic beauty, is when they're on a trip and they're looking for some photo spot they can make use of for showing off on their instagram, haha.

I guess it was quite hard to get yourself immersed in the OVA if you had to pause every 10mins because of the internet.. If you're considering giving it another try, that would be great! But if you aren't very interested in the aesthetics, that's cool too. Arthouse taste is supposed to be highly idiosyncratic. Do share with me if you have any arthouse you like! :)

CHC Jan 4, 10:53 PM
Thanks for the recommendation! Some indie shorts with unique art style always worth a try. I'll keep an eye on it and see if I can get my hands on it.

As for Revue Starlight, personally I simply love the flamboyantly choreographed stage-fights. Plot-wise it is a meh. (Seriously the anime industry is running out of good scriptwritters.) The slice of life element and the characters are cute and okay but nothing that would change your opionion of the show. It reminds me of Seijun Suzuki who was a Japanese New Wave film director who played all kinds of bold artistic experimentations on the trashy b-movie projects that his studio assigned to him (which eventually gets him expelled because of the financial disaster he has caused, lol.) To me Revue Starlight is one of the few anime that fall in the campy middle ground between lowbrow and highbrow, unapolegetically over-the-top and self-confident enough to not protect itself with any sense of irony, which can be a really good thing or a really bad thing depending on your taste.

Btw I see you have recently just watched Koushoku Ichidai Otoko. What do you think about it?

Did you have a nice christmas/new year? Or total corona isolation?

Aisukurimu Jan 3, 9:24 AM
Yes, Cike Wu Liuqi!! It's on Netflix (if you have Netflix). This one is a hidden gem, very unique, if you are interested you can check out my review on it.

Aisukurimu Jan 3, 8:49 AM
Omg how did you know *shock* my profile picture is from a Chinese web comic SQ

Chinese animu is very difficult category, even growing up as Chinese I was more exposed to Japanese anime, there was minimal Chinese animation and it's definitely no competition to the Japanese ones. Recent ones that really got me is Scissor 7. The only one I can think of when you mention "old ones" is Da Er Duo Tutu pftthahahah whether this have held up with time I do not know, but I do know I loved this as a kid. Since Chinese animus are on the rise, might be worth writing an "insightful" compile blog post about it huh.

Aisukurimu Jan 3, 7:48 AM
Thank you \(￣︶￣*\))
I didn't think anyone will ever visit my profile, guess I'll start adding favourites from now on

CHC Jan 3, 1:11 AM
Hey nice to meet you comrade! I'm not sure where I should begin as for my fav anime.. Everything I gave an 8 or above on my list are something that enthrals me. In terms of recent show I think Kakushigoto and Houkago Teibou Nisshi were pretty good, despite overall 2020 has been a pretty disappointing year for anime. We seem to have similar taste in terms of being able to appreciate both arthouse shit and moe shit. I guess I can recommend Starlight Revue? Haha, it's a show I keep revisiting even though it's deeply flawed in some crucial respects.

Btw I no longer check my MAL regularly because of other things that preoccupies me recently. I hope you won't mind if my replies are gonna be somewhat irregular.

Does it look like you will be getting a white christmas in Saint Petersburg?

I guess I'll have to give On-Gaku a try, doesn't really look like something i feel like trying but a passion project created almost single handedly by one guy (like one of the reviews said) sounds interesting.

I just finished Golden Kamuy and it was great. I took too long breaks inbetween episodes so a few times when I got back into it i had forgotten some parts and was kind of lost so I regret that, but still ended up really liking it.

About Barakamon and Usagi Drop all I can tell you is i really liked them both when i watched them. I'd like to recommend you pick up Barakamon but I can also imagine it's not for everyone.

About my scores all they really say is what I thought of a particular at the time I watched it, I think myself that some of the scores don't make sense when compared to others shows which kind of bugged me before but it doesn't feel worth it going through everything again so whatever :)

I just went through our conversation history and smiled (or smirked?) about it again. One point - if you ever have recommendations for me or just want to tell me about shows you like, please feel free to do that and don't hold back or mind the shows i already watched. I noticed you talked about several shows that I already watched or had started watching earlier but that doesn't really matter.
I enjoy hearing other peoples opinion of the shows and also I'm kind of an extreme "re-watcher". It started off with me just rewatching favourite shows but now often when i try to think of new stuff to watch i fall back to "why watch a bunch of crap to try and find a gem when I can rewatch something i know I like".

Also I don't know if I asked you about this before but from your name I assumed you're from Finland, but on your profile it says you live in St. Petersburg, what gives? :o

How are you finding the current season, any shows you like? Or anything youre looking forward to from the coming season?

sockerdricka Oct 16, 2020 4:41 PM
Yeah, from what I remember the first and second ED songs are really nice. There were some songs I didn't like (i think the OP of the 3rd season), for me it was an extremely calming show but that song broke it. To the point that I actually tried to edit the files to insert the OP/ED of S1.

(I tried to look it up right now but one of my 4TB harddrives full of anime crashed recently and I can't find Natsume so it might have been on that one, I'm kind of panicking).

If you didn't like it that's fine though, everyone has different tastes. I wouldn't want you to force yourself or anything. If it's the worst show you ever saw I'd rather you tell me that than pretend you like it :) I already know it's not a show for everyone. I also think I happened to watch it at a time when it resonated with me the most.

Yeah I'm excited for the new show, it's not a new season though which I would have prefered but something is better than nothing.
I can't help from thinking back when I got into anime, I found all these new super favourites and they were all from like 3-5-10-15 years ago and I kind of thought i missed the golden age of anime and there wasn't a chance in hell they'd ever get sequels. Now they all did! (Kind of)
Sick.

Yeah I'm watching Golden Kamuy as well. I remember really liking it from the start, but I forgot lots of stuff from S1/S2 by now so I feel somewhat lost when watching S3.
I LOVED Usagi Drop but damn, I think you have the same info as me regarding the manga, seems it turns weird and uncomfortable (no spoilers, I haven't even read it myself).

I remember when I started watching anime though, I was uncomfortable with some things and I also actually despised alot of the normal tropes from the start. Now I grew to enjoy some of them (like tsundere) but can't help but feel somewhat corrupted (this has nothing to do with Usagi Drop manga).

Couldn't see Natsume in your favourites so I was about to haze you for not watching it yet but you actually did, seems you didn't like it :( too bad. I'm kind of sad about that. Everyone has different tastes though which is completely normal (damn you for not liking it!) :)