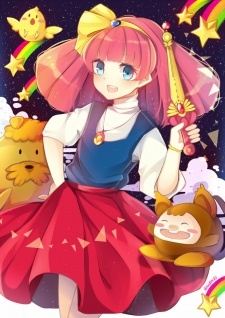 But yeah... I started Utena some months ago and I'm taking my time with it. I like Anthy but the filler episodes are a torture.
I'm a guy who loves repetitive scenes & music, so the duels are fine but damn... the Nanami episodes are always filler & they're super weird. They're the reason why I'm watching it slowly instead of binge-watching.

haddoudddd Jul 13, 6:52 AM
Yepp I agree with you. As of right now I did finish bakemonogatari and I did like it very much but the story was kind of all over the place that’s my only problem with it but the characters l, originality,sound, art and everything is really hartwarming but compared to katanagatari I’ll choose katanagatari any time because I liked absolutely everything in it. The story is very simple,their goal is to collect the 12 swords,it just seemed like it was going to be just another one of those animes until ep 4 and then I was like WOW. It explores really deep and interesting theme like finding purpose, why do people fight... whilst also entertaining us.tye best thing about the series and obviously most of NisiOisiN’s work are the characters. Togame and shichika are probably the best duo out of all the others I’ve seen.they both change so much throughout the series and u can see them change and learn something every episode from the side characters(this series has one of the best and most memorable side characters)and so they eventually grew on me. And the dialogue is for me really really important in a series because that way the characters seem much more familiar to you and they become much more realistic( that’s why I don’t like isekai anime) .character development is also STRONGLY present in this series(shichika familiarizes with the world thanks to togame and he finally becomes a full fledged human, and togame finally finds happiness and lives so many beautiful moments thanks to shichika and she finally finds her goal all along: to fall in love.the footsteps they left on each other is why they are so memorable to me.and also this series has one of the best last episodes in all of anime.and finally the art is 10/10 for me I LOVED it and also the sound is the second best for me right after bakemonogatari.so in conclusion this series is my favorite because it made me feel every emotion in between happiness and sadness, it’s originality, the beauty of it and the relationship between togame and shichika which for me is the best and most realistic relationship out of all the other animes(except maybe samurai champloo but it is arguable). I’m really glad u also liked it and u advise u to watch it again someday 😁

haddoudddd Jul 12, 8:53 AM
we Have 2 common favorites katanagatari and samurai champloo and since you’ve watched so many animes 😅 I’d like to know what really sets katanagatari apart from all the others in your opinion.

Akzhu7 May 30, 9:34 PM
Let's see how you get out of this. I don't think it's smart to talk about Sawako with me. You don't have what is required. Fall-chiboiii. Yeah, you screwed it up like you can't imagine! Tomoko is like a younger sister and Sawako is the true image of what I find beautiful in a real woman. Sorry Fall-chiboiii but you took too many steps without taking into account the multiple variants.

Hachiman has my same personality, INTP! I never forgot my appreciation for that character but that you pretend that I like Watari when he writes once every 10 years is something of the most absurd! F*ck Watari!! Hachiman is literally an INTP THE CHARACTER, but unfortunately Oregairu as a story is somewhat predictable and boring. The other characters limit Hachiman and I would prefer him to be in a more mature and solitary story. The only characters at level are Yukino, Komachi and Haruno

Akzhu7 May 30, 9:19 PM
Don't compare me to your liking for Tomoko, I like Tomoko because I find her amusing in her human stupidity. I find Tomoko adorable and funny, does that mean I'm like her? Not at all, Tomoko is just an endless meme and I like her wit to find a way to be a mess. There are multiple truths and realities that you do not understand about me. The reason why I like Sawako is because of her poetic and pure soul, it has nothing to do with the fact that she is socially awkward or has no friends. I think you deserve to be judged, after all I'm not going to let Tomoko talk bad about my waifu.

Sawako is a character that you have to understand with your heart, she is not a character that you can understand if you see her from a logical point of view. Sawako is the representation of romanticism, which means that she is the rebellion of emotions over the mind. You cannot understand a character if you are judging it before it tells you its reality and its truths. Sawako is constantly fighting with her own emotions, she is constantly lying to herself to gain a bit of inner peace. In the world of Sawako, emotions play an important role but she herself is not able to control those emotions, therefore she is controlled by her own emotions. Her fears are greater than hell itself and her heart is so pure because her love for the person she loves is deeper than her own worth as a person. Is it her fault? It is how things are in some days. In her darkness a light of hope remains, from her tears an obsession is born, which Sawako creates little by little with her own pure heart.

It is a story of how someone can be terrified by their own emotions, of how the most common things in life are forbidden for some people, of how despite her multiple defects and fears Sawako never forgets what is important, be loyal to your own heart and try even though your mind tells you that it is impossible. On her endless journey, Sawako constantly suffers and lies to herself. But that does not make her less intelligent, it makes you less capable of understanding other people's emotions. Sawako is much more complex than you think, someone who believes that stupidity or lack of resolution is a bad thing is someone who does not understand the hellish storm of chaos of a pure heart and a complex mind. Sawako constantly doubts herself, she is constantly learning about herself and despite the fact that she is afraid, and despite the fact that she has multiple insecurities ... Sawako finds a way to understand her own heart and rebel against her greatest fears. Sawako doesn't remind me of myself, Sawako is the kind of woman I find most beautiful. Pure, kind, intelligent and delicate. I don't expect you to understand my idea.

Beatrice? she just kept lying to herself. She only pretended to be strong when she was weak, she only waited to be rescued by her prince when she knew very well that her love was just a lie created by herself. I guess some men like to lie to themselves and find Beatrice more beautiful, I look at them and I don't understand them. A part of me is glad that I don't like her. It might be for very personal reasons therefore it doesn't matter what I tell you. If you like Beatrice, I suppose you like Beatrice. I guess things are that way for some reason.

I have room for 10 characters, you for 20. Do the math. I did not know that Hachiman was your boyfriend, sorry for insulting your love for that INTP 5w4.

Akzhu7 May 30, 5:38 AM
hey you, yeah you northsomethingcupcakelemonpie.. did you like my waifu? I find it funny that you have seen more than 700 anime and have never seen Kimi or Todoke. Sure, that changed recently, but still. Tell me what you think of my Waifu, I want to see your opinion of my favorite character. Don't you dare call her dumb or I'm going to write you in capital letters. DO U UNDERSTAND?

Do you really like Beatrice from Umineko that much? For my part, I find Beatrice as a forgettable and boring character. I really don't understand why Umineko fans overvalue the idea of such a character. Obviously it's for personal reasons, but still!

20 characters and there is no love for Hachiman, I guess some have little memory! What happened? did you grow up or something?

Akzhu7 May 13, 1:31 PM
Hey weeb watch the second season of "Saenai Heroine no Sodatekata" is in another level. The first season was whatever but this one is a good one! do it! do it in my name! I'm not lying, it's at a level that surprised me. Solid 7.5/10. Makes the Monogatari series seem vulgar weeboo shit, oh wait a moment. Do you know why Kimi ni Todoke did not reach you? Do you really want to know the truth? I don't think you can handle the truth. I will be compassionate and I better leave you with your ideas. You can't understand Kimi ni Todoke.

TrueRandomGamer Apr 23, 6:32 AM
Hey, he makes solid and entertaining videos. And I get to learn about classic anime (which I love) I never would have otherwise.

TrueRandomGamer Apr 3, 8:41 PM
Your review on a one shot. Read it recently and saw your review afterwards. Thought it was pretty accurate, and our affinity was close.

CureDream Mar 31, 12:46 AM
I didnt really have a specific reason,but I just wanted more to follow and see what other peoppe like.
All Comments