Manga 'Yofukashi no Uta' Gets TV Anime for Summer 2022 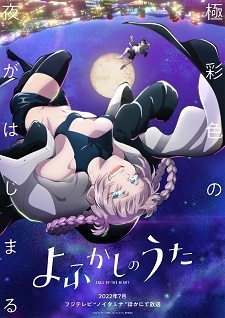 Fuji TV opened an official website for a television anime adaptation of Kotoyama's Yofukashi no Uta (Call of the Night) manga on Thursday, revealing the main staff, cast, a teaser visual (pictured), and teaser promo. The anime series is scheduled to air on Fuji TV's noitaminA programming block in July 2022.

Synopsis
Kou Yamori seems like a typical middle school student on the surface. Relatively good at studies and amiable with his classmates, he puts a lot of effort into maintaining this facade. One day, however, he decides to stop pretending and quits school, developing insomnia as a result of having no daytime outlet for his energy. When taking walks alone at night, he feels marginally better, though he is aware that his inability to sleep should be considered a serious problem.

On one such walk, Kou meets a weird girl, Nazuna Nanakusa, who diagnoses the cause of his sleeplessness: despite making changes in his life, he is still holding himself back from experiencing true freedom. She says that he won't be able to sleep unless he is satisfied with how he spends his waking hours. When it appears that she has resolved his current worries, Nazuna invites him back to her apartment to share her futon. After a while, unaware that he is only feigning unconsciousness, she leans over him—and bites his neck! [Written by MAL Rewrite]

Kotoyama began the supernatural romance manga in Weekly Shounen Sunday in August 2019, a year and four months after concluding Dagashi Kashi in the same magazine. Shogakukan published the eighth volume on July 16. Yofukashi no Uta has a cumulative 1.5 million copies of its volumes in circulation.

VIZ Media licensed the manga in English last July and shipped the fourth volume on October 12. The fifth volume in is planned for a December 14 release.

Hope it gets 2 cours. The early part of the manga is solid and charming, but the latter half is a definite step up.

Lidenfilms definitely gives some cause for hesitation and Itamura is a divisive choice. Fortunately Yofukashi no Uta doesn't demand a class adaptation, just a competent one.

RobertBobert said:
Again shounen and again vampires. Is Japan ruled by the shadow government of teenage vampires? And if without jokes only it seems to me that the Japanese are gradually moving from bishoujo to dominant oneesan?

BTW, the guy becomes vamp after being bitten, or is one of those stories when the vamp needs to do a little extra to spread their species?

First Aharen and then Yofukashi, looks like I have to stop reading manga and rather just wait for the anime adaptation~

Only problem is Liden Films...

I wasn't sure about this show at first, but now I'm super sold.

Gonna watch this all cuz of Creepy Nuts. It looks interesting too.

The main girl kind of reminds me of zero two tbh

Nazuna really looks like the student council president from kagegurui

I started reading the manga around Halloween and now an anime adaptation gets announced, talk about great timing.

The animation looks good too. Definitely hyped for this.

More and more vampire animes are coming out lately. The PV looks great, and the background song is epic


hmm i mean nearly the entire story revolves around the romance between kou and nazuna and even then its not really that prominent?? it does become more relevant in the later chapters but idk how much the anime will cover. i recommend reading it for now to see if you like it!! the first few chapters drag a bit i will be honest

Thanks for the reply! I will check the manga!:D

Nice that this one got an anime adaptation! Didn't expect Sora Amamiya voicing Nazuna as I actually more imagining Aoi Yuuki voicing her but aight... But yeah, Nazuna looks even more sexier and prettier in this anime ngl!

WanderingRonin said:
One question for the manga readers -> is it worth to read/watch mostly (only) for the romance? Like, are they a couple or something? I'm just a sucker for romances, bear with me:,)

hmm i mean nearly the entire story revolves around the romance between kou and nazuna and even then its not really that prominent?? it does become more relevant in the later chapters but idk how much the anime will cover. i recommend reading it for now to see if you like it!! the first few chapters drag a bit i will be honest

DrHizzle said:
tl_dr said:
I wonder how far it will manage to adapt. Didn't like the manga that much early on, but it grew on me. Especially Kotoyama's art style.
I may need to give it another try, then. I read the first 35 or so chapters and I just couldn't really get into it. It seemed like the characters just never really showed any emotion or cared about anything.

Hmm in that regard I think that does change, current chapters have quite a few things going on, although I also liked the episodic-like nature early on.

Amamiya sora voicing the lead and that too a vampire, can't see myself missing this one then.

One question for the manga readers -> is it worth to read/watch mostly (only) for the romance? Like, are they a couple or something? I'm just a sucker for romances, bear with me:,)