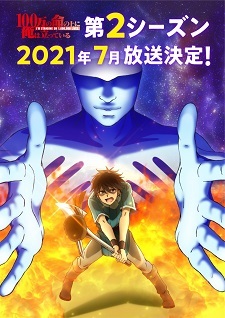 The 12th and final episode of the 100-man no Inochi no Ue ni Ore wa Tatteiru (I'm Standing on a Million Lives) television anime ended with a second season announcement on Friday. The official website also revealed a teaser visual (pictured) and an announcement promo. The second season will begin airing in July 2021.

Directed by Kumiko Habara (Angolmois: Genkou Kassenki assistant director) and scripted by Takao Yoshioka (Shichisei no Subaru) at Maho Film, the anime series debuted on October 2. Crunchyroll simulcast the anime as it aired in Japan.

100-man no Inochi no Ue ni Ore wa Tatteiru adapts Naoki Yamakawa and Akinari Nao's fantasy action manga, which has been serialized in Bessatsu Shounen Magazine since June 2016. Kodansha published the 11th volume on December 9. The manga has a cumulative 1.6 million copies of its volumes in print.

Kodansha Comics licensed the manga in English last June for both digital and physical release. The ninth volume was released digitally on July 14, with a physical release planned for January 19, 2021.

Synopsis
Ninth grader Yusuke Yotsuya is practical, friendless, and not active in any clubs. Then one day, he and two female classmates are suddenly sent to another world where they must work together to battle for their lives. Yotsuya is a lone wolf and has always lived his life according to his wants, but how will that work out now that he's supposed to be a hero?! (Source: Kodansha Comics)

I think Maho Film also made a Similar Contract.
So many errors, holy shit. People like you who know shit about anime industry just spread that shit and they repeat it further.
1. Disc sales stopped being relevant few years ago. What matters today is advertising source material and merchandise like music - didn't you notice one episode had ED with singer playing in snow? - it's pure marketing, plus stream revenues.
2. Almost every studio which does adaptation has deal with publisher or rather Production Commimitee off which publisher is part of, Fire Force anime advertised manga enough to have it 2nd season announced at the end of first.
3. It's not studio that give second season, it's owners of anime IP (production commitee mentioned earlier) who decides to employ studio to make another or not.

It will get better.

Well surprise surprise, though not the best this season but it interests me to a certain point like the episode 11 revelation and I'm curious to find out what more this can offer

Since it will release in half a year I think it was planned beforehand.
It's fine with me since more anime to watch

I think Maho Film also made a Similar Contract.

I'd take new seasons for most animes so same for this one.

Why though? I don't see why this deserves a 2nd season.

Why god why??
Why is that many amazing anime gets only one season and in other hand trash anime gets many season?

I didn't saw it coming, NGL.

I think Maho Film also made a Similar Contract.