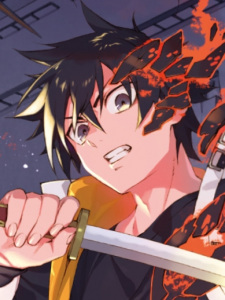 Tsundere Akuyaku Reijou Liselotte to Jikkyou no Endou-kun to Kaisetsu no Kobayashi-san
Jan 7, 2:50 AM
Watching 1/12 · Scored -

Zaphkiel_El_Rem Apr 11, 2021 9:21 PM
I see I see..... If they can make a good adaptation out of the 2nd season, there's a good chance it can sell and make more seasons since the introduction of Alas Ramus in the 3rd vol. was a good turning point of the story.

Well then, one of my favorite novel from last year was Saikyou Degarashi Ouji. For the lack of better comparison, it's like a version of Code Geass where the protagonist isn't an anti-hero this time around, but his cunning abilities are just about the same.

Shinwa Densetsu no Yuusha was one of the good novels I've read years ago but sadly the translation was on hiatus..... until recently. It got picked up by a new translator and is now back on a regular update .

As for this year, I haven't found any good read except for Ascendance of a Bookworm I suppose.

And good luck on your Kanji studies. I tried that 3 years ago and I did finished my Katakana at least but gave up on the 2nd stage eventually XD so I know how much of an effort is needed to learn Japanese so good luck pal.

camel-d Apr 6, 2021 8:19 AM
I like how you integrated the different cover arts and illustrations of To Aru in the about me section well done :) !!

First time I've heard of Dracula actually so I have no idea what to expect out of it either but I will surely give it a try too knowing it's made by Wagahara. Is it a reverse Isekai too? Also, I didn't knew Segare is finished too already, rip to that one, such a shame because it only just started to divulge more of the mysteries.

As for the anime, I'm not sure which direction will it go to, I don't exactly mind it being an original story but I'm hoping it just follows the novel route so if there's a slim chance of getting a third season, it can adapt up to volume 8 or 9, as that arc was the best one imo.

Zaphkiel_El_Rem Jul 6, 2020 3:33 AM
Back in my noob day, I also did something like that, manually adding the polls. I quit after doing it once, such a drag LoL.

There's also some people out there who create thread discussion for LN chapter by chapter, now that's some real hardworking. Like this guy;
https://myanimelist.net/manga/88930/Youjo_Senki/forum

I usually just make those threads using the preset for manga discussion chapter, then after I post it, I just click "edit" then change the title and other stuff;
I.e.
Xxxxx chapter xx discussion >>> Xxxxx Volume xx discussion(same with the poll)

DarthBob Jun 22, 2020 4:50 AM
Yeah, that makes sense. Rakuin no Monshou is a really good one, even if it drags a bit near the middle. Ignore any of the reviews on Novelupdates that complain about the ending - the ending was perfectly fine.
As for Mushoku Tensei... Well, I guess that decision is good in its own way, since around 70% of the WN translation is atrocious, and often feel worse than machine translations. Not to mention how the content can just outright disgust you, with how perverse it is - my score for the first 5-6 volumes was around 2, and it managed to climb up to a 7 by the end... Which is quite an achievement, since I'm usually not very forgiving when it comes to this stuff. As for the anime... I don't really have any hope for anime adaptations of Isekai LNs, with Re:Zero being the only good one I can think of. Doesn't really help that the studio is absolutely new either.

Yeah, as long as the quality doesn't deteriorate, I'm cool with Index hitting a 100 volumes. While I can't say that the quality was constantly improving (some major bumps, like the Baggage City arc), it was certainly keeping up for the most part. NT had some of the best arcs in the series (the entire Othinus Arc), so I can't be too harsh on it haha.
My enjoyment of the Index series kinda tends to oscillate, since I generally like all the Science arcs and tend to get bored by all the infodumping in the religion arcs.

Thanks! I totally forgot about adding you haha. I've accepted the request :D

DarthBob Jun 21, 2020 4:12 AM
Ah... I just noticed that GT exists haha. I did think it was pretty abrupt for the story to just end there (Unlike OT), but it's just Kamachi re-branding the series again... Wonder why he does that so much. Then again, we're getting more Toaru, so I can't really complain.

Yeah, it's pretty similar with me when it comes to dropping stuff. I try and complete/catch up with any LN before deciding whether to drop it or not, although some of them might be dropped sooner if they're really bad. Isekai Tensei Soudouki is an example of something that I somehow ended up catching up with, even though it was... Kinda bad, to say the least.

Well yeah, I tend to be pretty critical about stuff, and I really can't stand anything that's just blatant wish fulfillment, or stuff where ecchi takes priority over the story haha. Sure, do tell me if you find something really good - I'm usually on a lookout for stuff like that.

Just something I noticed - you don't seem to have Rakuin no Monshou on your list. Do you know about that one? Also, how about Mushoku Tensei? That's one LN that I had to force myself though, since the ecchi was overpowering, but the story was just really good haha.

DAB is from a completely different cloth compared to DAL, it focused more as battle-centric, mysteries and less to no romance. If you really like Kurimi, then yes you should prioritize this more as her adventure is much more thrilling than you would expect.

HO is pretty much exactly the anime, the only difference is that the last arc of the anime is original. Each volume is a stand-alone which is kinda formulaic but Kamachi really made a good job of showing his tons of ideas of how to save the world in different fashion. It doesn't really have a straight storyline so I suggest binging on it, heck you could even start at any volume.

Alderamin is a heavy dark war stories, the current translations is only halfway done but from the spoilers I've seen, it could potentially one of the best tragic series out there.

World teacher is..... Not really sure how to describe this one, it's an adventure type of story where the characters doesn't really any end goals or anything. They're adventuring for the sake of having an adventure. It's not that bad if you're a fan of such.

As for mahouka, yea vol 20-23 is a mixture taken from the summary and then mtl'ed the dialogues. I haven't heard any plans so far if those guys who translated 24-31 is willing to edit those 4 volumes or maybe they're just gonna leave it as it is. Yen Press is almost up there anyway, they've released the official for vol. 17 two months ago.

Honestly, I've been in a slump in reading novels for almost a month now, the last series I checked out was Solo Leveling, that was terribly horrible. But thanks for the recommendations, those two were in my plans to read for some years now.

DarthBob Jun 20, 2020 11:07 AM
Yeah, you'll enjoy Danmachi as long as you're willing to sit though the initial bit. Then again considering how Sevens is in your favorites, that shouldn't be a problem haha.

Didn't really expect NT to end there... I mean, it just seems to keep going one way or the other, so I was pretty surprised when I saw it marked as completed on MAL. I haven't read volume 22 Reverse just yet, but I'm assuming that's volume 23 in the database. I guess I'll get to that once I finish rereading Danmachi.

I'm surprised that you even manage to find that many LNs/WNs that interest you. I usually end up scouring through Novelupdates and I'd be lucky to find even one that looks remotely interesting (only to be let down within a few pages/volumes). You know any of those hidden gm type LNs/WNs? I usually keep a lookout for those, so any recommendations would be welcome :D

Congintive Jun 20, 2020 8:51 AM
Thanks dude there are many novels which I'm reading right now and most of them aren't on mal so that really disappoints me and about otome ln isn't ln the 1st one to release so why only manga is approved?

DarthBob Jun 20, 2020 1:52 AM
Well, funny thing is that I tend to prefer WNs over LNs, since they are often closer to the actual story that the author wants to tell. While there are plenty of cases where the LN ends up being more fleshed out or better arranged than the WN, there are also many cases where the LN kinda kills the atmosphere that was built up in the WN. Basically the good and bad aspects of having an editor haha.
As for my brother, he dropped Sevens after 2-3 volumes because of the stuff I mentioned earlier. As for the length, 20+ volumes is appropriate, since the WN had 300+ chapters, and fairly long ones at that. Not sure how great an idea it would be to throw in even more characters and content though, since Sevens was a series that already had far too many characters, many of which the author simply had to abandon along the way (either due to him forgetting, or just him having to push them to a little mention at best).

Yeah, Kamachi's pace is just ridiculous, and the guy actually manages to release one volume a month too, while juggling all that.

Hmm... Why wait for the 15th volume in particular? Volume 14 is a fairly good stopping point in the story, since there's no real cliffhanger or anything - they just ended an arc there. If anything, finishing at volume 15 is more likely to end at a cliffhanger haha.
One volume a day is a pretty crazy pace, and the only time I ever did something like that was when I read the Index series... To be fair, that was during my exams, so I had extra motivation to procrastinate.

Falling in Love with the Villainess is perhaps one of the best WNs I've read, especially the first two 'Arcs' (~80 chapters), which were brilliant. After that, I'm not entirely sure where the author is going, be he seems to be gearing up towards a conclusion, so I'm waiting for that. It's the second best Isekai story I've read after Re:Zero, and I'd definitely recommend giving it a go. No rush or anything, but don't exclude it haha.
All Comments