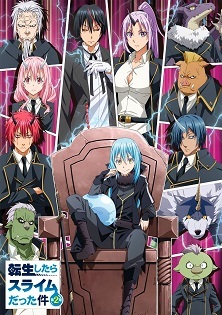 The official website of the Tensei shitara Slime Datta Ken (That Time I Got Reincarnated as a Slime) anime series announced on Sunday that its second season will air in two cours. The first half will debut in October 2020, with the second half in April 2021. The website also revealed the first promotional video.

Bandai Namco Arts simultaneously announced a television anime adaptation of Shiba's Tensura Nikki: Tensei Shitara Slime Datta Ken (The Slime Diaries: That Time I Got Reincarnated as a Slime) spin-off manga. The anime will air from January to March 2021.

Synopsis (Tensura Nikki)
"Dear diary... I got reincarnated as a slime."

Even in another world, lives aren't always on the line. There's plenty of work to be done, from feeding the community and forging the items the community needs; as well as plenty of play ...and hijinks throughout! Join Rimuru and friends as they kick back and enjoy their daily lives. (Source: Kodansha Comics) 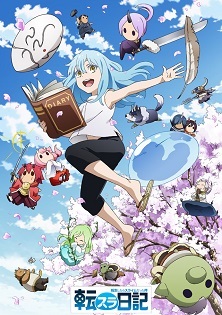 Voice cast from the main television anime will reprise their roles in the spin-off.

Kodansha's Monthly Shounen Sirius magazine began serializing the spin-off manga in April 2018. The third volume went on sale on November 8 last year. Kodansha Comics licensed the manga in English in July 2019 and published the second volume on September 10. The manga has a cumulative 500,000 copies of its compiled volumes in print.

The television anime is based on Taiki Kawakami's manga adaptation of Fuse and Mitz Vah's adventure fantasy novel series, which aired in 24 episodes in Fall 2018. Crunchyroll simulcast the anime as it aired in Japan, while Funimation streamed an English dub. The latter also released the anime on home video in two installments on October 1 last year and February 4.

splitting it in two parts is really good resource to keep the quality of the show, like they did in sword art online, that animation was over the top, 4 real.

That is a lot of episodes! More hype!! It's one of my favorite isekai series. Hopefully the story stays interesting enough and not stagnate.

I look forward to it. :D

Great news!!! Hopefully, if they pace this season like they did in the first half of the first season, there’s a lot of good content waiting for us that I can hardly wait for.
Also, it’s pretty clear (from the trailer) that they are going to include the materials they skipped over in the second half of the first season, which is great and a genuine relief since they are pretty necessary for this season to work.

sugoi that they also adapt the slice of life manga, I hope they will later adapt the bunny girl spin-off manga ^^

What wonderful news, the franchise will stay for 9 months on air

Great news, looking forward to this!

Our Lord and Savior Rimuru Tempest

good news, at least we get a long lasting isekai lube.

9 months of Slime in a row. That’s a rarity for any franchise these days

That's 9 straight months of new TenSura content, no wonder why they took their sweet time.

Quite the stark difference between the theme in the PVs, lol.

Personally, I wasn't the biggest fan of the 1st season at all but I'm still mildly looking forward to this.