A new television anime series for the Love Live! franchise was announced by animation studio Sunrise on Tuesday. The tagline for the new anime reads, "Watashi wo Kanaeru Monogatari. Hello!!! Love Live!" 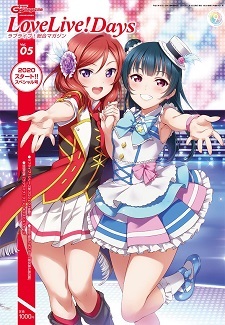 An open audition for one of the main cast members will begin on March 12. Participating women must fall between the ages of 15 and 22 as of April 1, 2020, be able to move to Tokyo upon passing, cooperate with video recording during the screening process, and be unmarried. Contestants currently enrolled in junior high school or lower, and those with an existing contract with a recording company or an entertainment agency will not be allowed. Minors will require parental consent.

The Love Live! franchise—created by animation studio Sunrise, music label Lantis, and Kadokawa's Dengeki G's magazine—debuted in 2010 with the Bokura no Live Kimi to no Life single. The first two seasons, centering on the idol group μ's, premiered in Winter 2013 and Spring 2014, followed by an anime film in June 2015.

The idol project then shifted their focus on the new nine-member unit Aqours, who performed their debut single, Kimi no Kokoro wa Kagayaiteru kai?, in November 2015. The first Love Live! Sunshine!! television anime aired in July 2016, followed by a second season in October 2017. Love Live! Sunshine!! The School Idol Movie: Over the Rainbow, the latest installment in the franchise, opened in Japan last January.

I hope you find the strength to let go of your dead husk of a franchise.
I'd love to know what you mean by "dead." lol

Ugh, we really need more Idolm@ster instead.
I hope you find the strength to let go of your dead husk of a franchise.

I just finished the first season of the original love live and enjoyed it, glad to see even more love live animes are being made

I watched this anime and its nice https://www.napad.pl/kontrola-dostepu.html

Interested in seeing this even though I've pretty much moved to the Idolm@ster camp now. I hope the cast will be more like that of the first season than the second.

I would say that if they did an original installment and not Shiny Colors (I don't care for the characters in Shiny Colors).

As for this new series I hope it's actually good.

Their use of N SIF girls for PDP was quite limited so i really doubt they'll assemble an entire new unit with them only. In fact, i'll be surprised if they use them again at all.

SO it was confirmed it will be a nine-member unit? damn.

Lol... "unmarried". So japanese, it hurts. Reminds me of scandals about a japanese idol who had to shave her head because a tabloid managed to take a photo of her while she was talking to a male friend... Not even a boyfriend... They are completely crazy... And the girls who accept that are even more so...

Well I guess this explains why the Nijigaku anime is likely going to have a different artstyle.

Though this makes me really curious about if this is actually the third generation of Love Live, then how will they end up handling the rest. Aqours likely doesn't have too much time left, and Nijigaku, despite being considered just a side project, is getting rather popular, enough for its own live concert and initially-unintended anime. And because of that, this announcement comes off as really strange to me. All the promotional images with Ayumu standing next to Chika and Honoka, along with all the images of all the groups together did kinda lead me to believe Nijigaku was supposed to be the third generation of Love Live. And while I'm so glad they're getting their own anime, which will probably do so much more for their characters than a mobile game can, I still can't help but feel bad for them in a way. It's not like they're not getting work both as voice actresses and singers, but the Nijigaku VAs are super talented, and it sucks to think that Lantis just thinks of them as a side-gig and not a main group.

That aside, though, I'm interested to know how this show will play out. It said they're only looking to cast one person for this. It would definitely be interesting if it's about one person trying to make it as a school idol by herself, though I'm not sure how far that concept can be taken. Or, as others have suggested, the other girls have been/will be cast in a closed audition. Either way, they're going to need to something to set this apart from SIP and Sunshine (and whatever they plan on doing with Nijigaku). I don't think they'll get away with having another school-closing story, and while Sunshine was a good subversion of expectations, I'm not sure they'd be able to do that kind of story again. I'd say that if it's a full group of nine, maybe trying to make it big as an idol wont actually be the main focus, but I don't think that's likely (or perhaps that's what Nijigaku will do.) Another unlikely thought I have is that the main character/characters aren't actually idols, or they become idols under completely different circumstances than the other groups.

Since that open audition isn't until mid-March, I doubt we'll hear anymore about it until late spring or sometime over the summer. That coupled with the growing hype surrounding Nijigaku makes the timing of this announcement quite strange to me. I and so many others have a lot of thoughts and uncertainty about this, and we really want to know more. But hey, it's a new Love Live project, and Love Live has quickly become one of my favorite multimedia franchises. So I'm willing to wait. It's good to have something to look forward to, after all.

Apparently according to the news on Twitter, this is the official "Love Live! 3rd generation". Which means they will likely be a completely new characters just like the time when Aqours shows up.

Since Muse is smile, Aqua is Pure, then this will be a cool type??? Looking forward to it!

A bit sad that they announce this not long after NijiGaku got the spotlight, but then again i would love for this franchise to grow more!!


Tigerle said:
I am waiting desperately for this anime. I will see Emma Verde! Imho the best N-girl, and she ispart of this new group! We finally get a chance to know her better!
This is another new project, not the Nijigasaki School Idol one.. XD
But I do agree that it's great to know the characters better! Emma is my best girl next to Shizuku in PDP~

I do hope that this new entry can bring the other characters in the mobile app that don't have as much spotlight as U's or Aquors or Nijigasaki into the light. Who knows, or maybe they will make an entire new cast of characters and make it as it's own original entity entirely.

But seeing stuff like this does make me wonder and look like the franchise is growing more and more as time passes by.

I'd wish Imas could've gotten something like this, but this is positive news still.

Most girls that have been on Love Live had already worked as Actresses or singers (For example: Dia's Seiyuu working on GoBusters beforehand). It feels refreshing that they are doing an open audition for a new set of idols.

Wow, they really are going all out to breath a new life into the franchise. Still, i'll remain cautiously pessimistic as i doubt any of the new entries would match the original.


Konradikon said:
This announcement is so important that I've been notified twice lmao
Same lol


ChartTopper60 said:
CALLING IT NOW
The N Girls/SIF Girls are getting their own anime.
Just watch. If I'm wrong, well fuck. But seriously, auditions? I'm telling you, dude.
Their use of N SIF girls for PDP was quite limited so i really doubt they'll assemble an entire new unit with them only. In fact, i'll be surprised if they use them again at all.

First Nijigasaki Girls, then All Stars and now this. Glad to see the expanding horizon of Love Live Project.

This is how Love Live will take the new step to expand the franchise due to Love Live! Fest aftermath...2 animation project simultaneously...NijiGaku & then this...

Amazing. I liked the PDP announcement but I felt it lacked something. Looking forward to this!

I am waiting desperately for this anime. I will see Emma Verde! Imho the best N-girl, and she ispart of this new group! We finally get a chance to know her better!