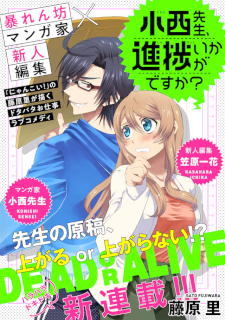 In April 2010, the series went on hiatus due to Fujiwara's declining health. It returned on an irregular schedule the following November and switched to Comic Meteor in September 2012 due to FlexComix Blood merging with the former. Flex Comix published the sixth and latest volume in October 2014.

I will probably check his new work out but man, it kinda stings. Nyan Koi is literally the only Slice of Life show of it's vein that I like.

I heard Nyan Koi and came running. I hate to see it abandoned like this.

Wait what? what about nyan koi. I've been waiting forever for the continuation ugh. i guess nyan koi is axe now. sad his starting a new cliche series which introduce a mangaka and editor without elements this one is pretty boring i guarantee it

Daniel_Naumov said:
People in good faith finish their litter first, before starting to make another one.
this was how i reacted too. i'm not planning to read new one since author seems untrustable

Sad to hear the Nyan Koi manga was never finished. It's been years since I watched the anime but its one of very few shows I'd actually like a new season of.

why abandoning nyan koi
why
T_T

RIP any likelihood of a continuation of Nyan Koi.

I thought the author died because there was no news of them in about a decade or so?

People in good faith finish their litter first, before starting to make another one.

Haha I thought that was Kirino from Oreimo for a split second.