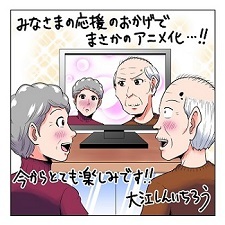 Synopsis
An old man well into his 60s makes the hearts of old ladies flutter with his handsome speech and charming behavior.

Ooe posted the first two-page manga of Komatta Jiisan on his Twitter on November 22 last year—Good Couple Day in Japan—which garnered about 130,000 likes. Earlier this January, he began posting the story on Line Manga, where the 44th and latest chapter was published on November 25. Kadokawa released the series' first compiled volume on November 22.

directly in my PTW
no question asked

I'll save this anime when I'm actually old hag...