'Shokugeki no Souma' Gets Fourth Season, Switches to Jump GIGA 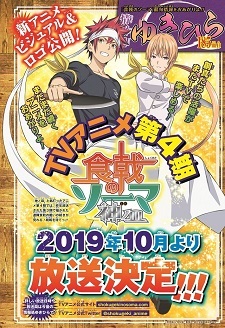 The issue also revealed that the manga will run for three more chapters under the title Shokugeki no Souma: Le dessert in Jump GIGA. After nearly a seven-year serialization in Weekly Shounen Jump, Shokugeki no Souma will switch to the magazine's first Summer 2019 issue on June 27.

Tsukuda launched the manga featuring illustrations by Saeki in November 2012. TV star and food researcher Yuki Morisaki collaborated with the creators, making dishes and recipes depicted in the series. Shueisha published the 35th volume on June 4.

Crunchyroll streamed all three seasons with subtitles while they aired in Japan. Sentai Filmworks released the first season in North America on Blu-ray and DVD in August 2017 and a premium edition the following month. The company also shipped the second season on both a standard and limited edition Blu-ray and DVD in February 2018.

VIZ Media licensed the manga in English in 2013 and simultaneously publishes new chapters with the Japanese release through its Shounen Jump service digitally. The 30th volume went on sale on June 4.

Wait I need clarification, is the manga continuing?

I knew the announcement will happen anytime soon

so they were trolling us when we were told that the manga was coming to an end, got it

I am really surprised this is getting an another season seeing how bad the manga is. Probably not gonna watch it.

This is fucking hilarious. I'm shocked that this was greenlit. I had always thought the anime solely existed to promote the manga, so with the manga going to shit I thought we would never get another season, and now we get a fourth season of a mediocre if not bad arc after the manga concludes? Can't say I saw this coming. I think the best route for the manga is for it to conclude the Régiment de Cuisine arc then have an anime original ending. I highly doubt Tsukada will be able to salvage this series with these last three GIGA chapters, so anything the staff comes up with will be better than what we ended up with.

Can't wait to see how shit that final arc is.

wondering what happen if there is a new series :'3

It was kinda to be expected, since Season 3 ended mid-arc in cliffhanger.

ahneeme said:
what's the qualifier for your manga to be moved to GIGA?
if the main magazine doesn't want you anyone then your manga should be axed there

gintama and saiki is not axed, they just get "extension" on giga. however, it seems not the case with souma, since last chapter clearly rushed.

saiki is ending perfectly in jump and giga chapter is epilogue, meanwhile, gintama is just sorrachi being sorrachi.


Chronowarp said:
Will there be a new manga entry, or should we expect the additional chapters to be added to the original series? Thanks!

probably tankubon fill, so i guess not.

Congratulations to all the Shokugeki no Souma fans for the anime and the continuation of the manga!

what's the qualifier for your manga to be moved to GIGA?
if the main magazine doesn't want you anyone then your manga should be axed there

Thanks for the info!

Now it's the epilogue of a BS of a manga (I mean it started well butt...)

yoshu- said:
Is it the final season or not yet?

Hope so, because even if Azami arc is trash but it's not on the level of the last arc of the manga which is just atrocious.

Now that the manga is ending I can finally binge watch it and catch up before 4th seasons airs.

The question is, will Risa Taneda return as Erina this season?


Chronowarp said:
Will there be a new manga entry, or should we expect the additional chapters to be added to the original series? Thanks!

I think they will just add it up to the current manga chapter, same thing happened when Gintama moved to GIGA and now to Gintama app.

Will there be a new manga entry, or should we expect the additional chapters to be added to the original series? Thanks!

Is it the final season or not yet?