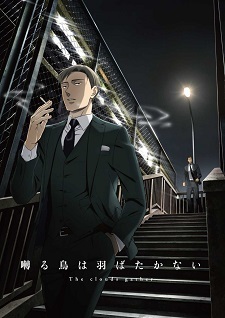 Saezuru Tori wa Habatakanai will be the first title under Fuji TV's Blue Lynx label, which the company launched on Tuesday. The label will focus on the boys' love genre and primarily produce theatrical animation.

Synopsis
Yashiro is the young leader of Shinseikai and the president of the Shinseikai Enterprise, but like so many powerful men, he leads a double life as a deviant and a masochist. Chikara Doumeki comes to work as a bodyguard for him and, although Yashiro had decided that he would never lay a hand on his own men, he finds that there is something about Doumeki that he can't resist.

Yashiro makes advances toward Doumeki, but Doumeki has mysterious reasons for denying. Yashiro, who abuses his power just to abuse himself, and Doumeki, who faithfully obeys his every command, begin the tumultuous affair of two men with songs in their hearts and no wings to fly. (Source: Digital Manga Publishing)


Yoneda began serializing the action boys' love manga in Taiyou Tosho's ihr hertZ magazine in March 2008. The sixth volume is scheduled for a May 1 release. The manga has a cumulative 1.4 million copies of its compiled volumes in print.

Digital Manga, Inc. licensed the manga in English under its Juné imprint in August 2013 and published the third volume in March 2017. The manga has also been localized in multiple foreign languages, including Polish and Spanish.

Holy mother of God!!!!!!!!!!
This is the best!
I can’t count how many times, I have read the Manga because, I just love it so much. And every time I finish reading and waiting for updates of new chapters. I always thought that this story will be amazing if they make and animated series of it, and now it’s happening, and in the big screen? how amazing is that! GOD I can’t! My heart is totally exploding of happiness and excitement.
I’m counting days now.
This story is amazing and I really admire the author Kou Yoneda. I hope that there will be chapters coming more and more.
I wish the best on everyone working on it. Thank you.

I am hyped for this and glad it is happening, but as we all know the trend with animated BL, or novel turned movies, they over-censor to the point of deleting entire chapters because it had a reference to a BJ [e.g. Love Stage, Junjou Romantica, Embracing Love]. Now I'm not a smut-addict, but PG-rated content, especially sexual, is a core part of the edginess and plot here. The manga also has one of the most wholesome scenes in this context later on. What I want to know is, how much of this will be cut to the point where it damages the overall feel of the story?

holy shit this is getting an adaptation
i wonder how explicit it's gonna be tho ...

I wasn't expecting this to ever get an anime. I look forward to it.

WOW can't wait !!!! Yoneda's work deserved to have at least one adaptation, glad it will be this one, the PV looked really good. I hope one day it will be Kyuugou's Acid Town & Ike Reibun's Bi no Isu turn too, both are yakuza stories and like Yoneda's some of the best i've read.

I haven't actually gotten to the manga but I see a lot of people say it's quality. I get skeptical with BL titles though. Most of them aren't as good as their ratings or reviews imply.

But getting any M/M material these days especially quality ones is sparse.

Saezuru anime is happening? This feels unreal. I can't process. The art looks more than faithful, so beautiful. GRIZZLY is at again and I trust them to deliver. Blue Lynx is a godsend. I'm excited to witness what the future holds for BL anime. I need drama CD cast to stay.

The manga is very decent. I'm glad one of the best yaoi mangas is being adapted.

>//< This made my day. Gawd~ You blessed my soul. This piece is one of the best ever found, I hope they won't make changes in the movie. Super excited for it!

I can't believe saezuru will get an anime adaptation. I feel like a new era has begun.

Hurray, another gay tragedy-porn. I was totally over these stories after Mysterio got the D up his bum by the Joker a decade ago.


_MushiRock11_ said:
Oh, I’d my eyes on this for a while after finding out it ranked 4th in the 2016 Kono Manga Sugoi, I think it was, but kept away because of the potential BL. Well, I’ll be hoping the BL element will be kept to a minimum and other departments to excel, mildly looking forward to this!
It's very BL even if the yakuza setting is well done.

Right, thanks for letting me know!

The official website has hints that this film will be the first part of a series because it mentions that this film is the "first chapter". I'm guessing it could be a trilogy that maybe adapts the whole story or at least catch up with the manga.
:o thats great to hear, im okay waiting for each trilogy, better than stuffed all ch in one film. Thank you for the info!

Oh, I’d my eyes on this for a while after finding out it ranked 4th in the 2016 Kono Manga Sugoi, I think it was, but kept away because of the potential BL. Well, I’ll be hoping the BL element will be kept to a minimum and other departments to excel, mildly looking forward to this!

A new BL movie to impress me, at least I hope so.