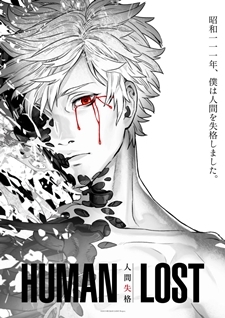 Story
"Mine has been a life of much shame."

Tokyo, 2036 (Showa year 111): a revolution in medical treatment has conquered death...
By means of internal nanomachines and the "S.H.E.L.L." system whose network controls them, human beings suffer no diseases, require no treatment for injuries, and are guaranteed a 120-year lifespan, free from illness. Yet this consummate social system warps the Japanese nation in a host of ways: unresolved economic disparities, ethical decadence resulting from deathlessness, grave environmental pollution, and the "Human Lost" phenomenon, in which people themselves, disconnected from the S.H.E.L.L. network, become malformed. Japan teeters wildly between two potential futures: civilization's restoration or its destruction.

Atmospheric pollution suffuses "Route 16" in the Outside—the area outside the Route 16 beltway. Youzou Oba, who lives an idle, drug-saturated life, joins Masao Horiki, a mysterious man who associates with the drag-racing gangs, on an incursion Inside—the area within the Route 7 loop where the privileged class lives—only to be embroiled in a violent struggle. When he encounters a malformed sufferer of the Human Lost phenomenon, a "Lost," Youzou's life is saved by Yoshiko Hiiragi, a girl of mysterious abilities who belongs to the anti-Lost agency H.I.L.A.M., and he discovers that he himself also possesses extraordinary powers...

Degradation and death. Life and hope. Buffeted by fate, a man tears himself apart and cries out. Rage. Sorrow. Pathos. Consumed by despair and bitter tears, Youzou Oba is himself transformed into a demon. A human lost... or a human who can find himself? (Source: Official site)

The novel serves as Dazai's final complete published work as he took his life a few days after the book was published. Whilst released in 1948, it remains as the second best-selling novel in Japan behind Natsume Souseki's Kokoro. To commemorate Dazai's 100th birthday in 2009, a movie adaptation of the novel was announced, which was later screened the next year. It spawned a new movie adaptation starring Shun Oguri and will be released on September 13, 2019. The first four episodes of studio Madhouse's 12-episode 2009 TV anime Aoi Bungaku Series also adapted the novel. In the 2011 Future Film Festival held in Italy, the series won the Platinum Grand Prize.

Edit: Released, and will be short serialization
https://natalie.mu/comic/news/337052

Different Audio Drama Given for Those Watching Japan Premiere of the Movie
https://natalie.mu/comic/news/357003

Nice, the story sounds very interesting. I will definitely give it a try!

I just finished reading the original story not too long ago. I was kind of hoping for a movie that was more like the book - preferably in the same style as Showa Genroku Rakugo Shinju - but I'll check it out regardless. Might be interesting.

Seems like they should say it was inspired by Ningen Shikkaku instead of calling it an adaptation since they changed the entire plot. The only things that are the same are the characters' names and some themes. Fans of Ningen Shikkaku would probably be disappointed by the complete change.
One of the deepest aspects of Ningen Shikkaku is how close it felt. It was our world, our society. Youzou could be anybody. Now, people can easily put it off as "fantasy," and it loses its impact.
Still, could be a great movie. I just don't think it was a smart move to call it an adaptation, because it has high expectations to live up to.

CAN'T f**kin' wait It's gonna be EPIC as Dazai's work <3
My Fav Q is : the novel intro
hope it get to be as awesome as his novel still is.

I can't say I am too pleased with the change of setting, it sounds too sci-fi-esque/dystopian. It takes the meaning and reason of his original dehumanization away. But I can't say I am not excited about it, so we will see how it goes.

Ramkec said:
What's going on here with the preview, its not even the same story wtf.

Yeah, that's what i noticed too after reading the synopsis and watching the teaser, seems more closer to Bungou Stray Dogs what with the sci-fi, super powers and agencies than being a adaptation of the actual novel, but still super excited because i like supernatural/action stuff aha.

Ramkec said:
What's going on here with the preview, its not even the same story wtf.

It's an adaptation. They took the themes of the original story and applied it to a more contemporary setting with different twist and turns.

that's a cool announcement, I'll watch because I liked the novel, Ill probably reread it if I can find it in my house somewhere.

Funny how the main character's voiced by Miyano Mamoru who voices Asagiri's version of Dazai Osamu is BSD. Don't really get how this is related to the novel, though.

What's going on here with the preview, its not even the same story wtf.

Was super excited that my favourite literature book is getting another animated series after Aoi Bungaku, but looking at the preview, the CGI is something less than favourable; leaves something more to be desired. Also looking at the plot, is it even the same story anymore? I am confusion.

Will still look out for this, might be better than first impressions.

Stark700 said:
Kuma said:
we just had aoi bungaku, does this even necessary?

Huh? That show aired a near decade ago.

Anyways, I'm not familair with the novel series or a fan of CGI but the premise has my interest.

i mean, a decade ago wouldn't necessary called old.

Kuma said:
we just had aoi bungaku, does this even necessary?

Huh? That show aired a near decade ago.

Anyways, I'm not familair with the novel series or a fan of CGI but the premise has my interest.

HOLY FUCKING SHIT!!!! THIS IS AN INSTANT PTW!!!! AND WHAT SEALS THE DEAL IS THAT THEY GOT MAMORU MIYANO TO BASICALLY PLAY DAZAI ALL OVER AGAIN, HELL YEAH!!!!! :D

I don't even care that this is CGI this time!

we just had aoi bungaku, does this even necessary?

When I saw this, the first thing that comes in my mind is Bungou Stray Dogs.

Heck, Mamoru Miyano is voicing in this and he voiced Osamu Dazai in that show.

Did they cast him here because of Bungou Stray Dogs!?