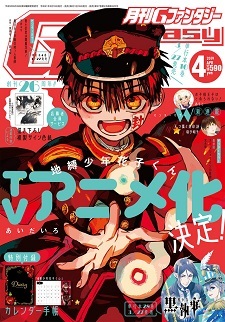 At Kamome Academy, rumors abound about the school's Seven Mysteries, one of which is Hanako-san. Said to occupy the third stall of the third floor girls' bathroom in the old school building, Hanako-san grants any wish when summoned. Nene Yashiro, an occult-loving high school girl who dreams of romance, ventures into this haunted bathroom...but the Hanako-san she meets there is nothing like she imagined! Kamome Academy's Hanako-san...is a boy! (Source: Yen Press)

The comedy supernatural manga began its serialization in GFantasy in June 2014, which has nine volumes in print as of October 2018. Square Enix plans to publish the tenth volume on March 27. Jibaku Shounen Hanako-kun has a cumulative 1.5 million copies of its compiled volumes in circulation.

Yen Press licensed the manga in English in July 2017 for digital release and published the ninth volume on January 29.

Can’t wait to hear nenes voice! Love the manga by far my favourite, I’m so glad it’s getting an anime adaptation.

This manga is so underrated agggg. Honestly super hyped and hoped other people get to know more about this gem.

_Ako_ said:
A trap that will probably have some good doujinshi material...


Why not?
Where do you see the trap? Hanako-kun (pictured on cover) is a ghost boy wearing gakuran.

A trap that will probably have some good doujinshi material...

I voted for this one! A boy Hanako is a rare gem.

A fine choice for an anime adaptaion. I think many will enjoy this supernatural, comedic, dark, romantic, work of fiction. I eagerly await this one.

Wooh an adaptation!! I love this manga and I hope they make the art stays gorgeous

I love the manga so I’ll definitely be watching this.

I'll check it out even though it has romance.

Looks cute and nice! I might check this one out!

Yep it have a romance subplot

Thanks. I'm looking forward to this anime then.

ninka22 said:
tragedydesu said:
The kind of fluffy romance i can enjoy
to my ptw

Is there romance?
Yep it have a romance subplot

tragedydesu said:
The kind of fluffy romance i can enjoy
to my ptw

looking forward to this!

Lol, this seems like it’ll be a hilarious watch!
Count me in!