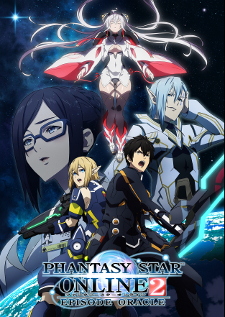 Phantasy Star Online 2 was released for Microsoft Windows in 2012 and PlayStation Vita in 2013. The mobile game titled Phantasy Star Online 2es became available on Android and iOS platforms in 2014. Sega released Episode 5—the latest Episode in the game—in July 2017. Episode 6 is scheduled for an April 24 release.

In my opinion this anime is basically the actual main story about the game itself while the previous anime tells you about how a ordinary high-school student found himself playing ps02.

HyperEmeralds9 said:
I got hyped when I see this anime PSO2 S2 its really great i am watching this again PSO2 S1
it's weird but i am not seeing that Gundam in this trailer
The first PSO2 anime was just a side story, this new anime is going to cover the actual main story of the game, which doesn't include any of the main characters from the first season.

From the 1st season's list of characters (https://myanimelist.net/anime/31223/Phantasy_Star_Online_2_The_Animation/characters), expect only the following ones to appear in the 2nd season:
Echo, Kasura, Matoi (she's a main character in the main story), Patty, Quna, Tia, and Zeno.

I want a PSO 1 (Episode I, II, Blue Burst) adaptation :/ It's obvious they chose PSO2 because it's currently more popular, but I think they should go back a bit to the past stuff. Anyway, i have no faith in this. The first anime series was a piece of turd.

malvarez1 said:
Wasn't the other Phantasy Star anime super bad?
It was pretty mediocre, but the new anime will actually be about PSO2's main story, unlike the previous one.

This new anime is what the first anime should have been about, instead of the high school setting.

Ehh, sure why not.

A mecha anime that makes Muv-Luv look S-tier in comparison.

As long as Matoi will be there, I will surely watch this

the first anime was a mistake

space harem online 2 aka waifu simulator game.
if the anime faithful follow the game story it will be good.

SkyDrop said:
Instead of TV format, they should have go for ova format. PV already revealed questionable animation.. wonder this will be another show that will struggle to reach above 6 mal score.
OVAs would not work for this, there's just way too much to cover for that.
Even the TV format, if it ends up being just 1 cour it'll probably be a rushed mess, but if it's 2 cours, it could end up being good, at least for me (though I'm biased since I play and enjoy the game).

From a story perspective, depending on how the adaptation is handled, this should be alot better than the previous PSO2 anime at least (which is not saying much). Though, even that anime managed to get a mal score in the mid 6s, so I could see this one maybe reaching the mid 7s if they don't mess it up.

Instead of TV format, they should have go for ova format. PV already revealed questionable animation.. wonder this will be another show that will struggle to reach above 6 mal score.

This is what the first PSO2 anime should have been, an adaptation of the game's actual story, none of the high school/Earth stuff from the previous anime.

I just hope it's 2 cours, I don't think 1 cour is enough for what it's going to cover.

At first, while reading the comments I thought people were exaggerating but this does look super generic. Besides not being a fan of the franchise - I think I will skip out on this one.

It seems generic like my shit, but I'll give it a try.... maybe.

Yeah, this is going to be a big fat no for me.