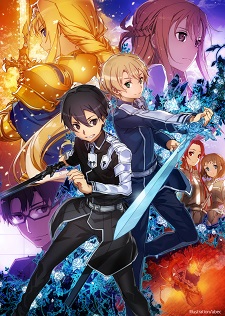 The Sword Art Online stage event at the Dengeki Bunko Autumn Festival 2017 announced on Sunday that the franchise will receive a third anime series, which will adapt the Alicization arc from the light novel.

Story (Alicization Arc)
Kirito awakens in a vast, fantastical forest filled with towering trees. In his search for clues to the truth of his surroundings, he encounters a young boy who seems to know him. He ought to be a simple NPC, but the depth of his emotions seem no different than a human. As they search for the boy's parents, Kirito finds a peculiar memory returning to him. A memory from his own childhood, of this boy and a girl, too, with golden hair, and a name he should have never forgotten—Alice. (Source: Yen Press)

Story (Sword Art Online Alternative: Gun Gale Online)
Karen Kohiruimaki always felt out of place in the real world. Due to her extreme height, she found it hard to make friends with other girls her age. Everything changes when she's introduced to VR and Gun Gale Online. In GGO, Karen is free to play the cute, chibi avatar of her dreams! Can Karen find friendship in this bullet-ridden MMO...? (Source: Yen Press) 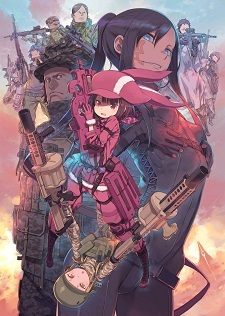 Written by Reki Kawahara with illustrations by abec, Sword Art Online has been publishing since 2009 and currently has 20 volumes in print. The light novel received its first anime season in Summer 2012, followed by a TV special in December 2013, and a second season in Summer 2014. The Sword Art Online: Ordinal Scale anime film featuring an original story by the Kawahara premiered in Japan on February 18.

Yen Press licensed the light novel in English in 2014 and published the 11th volume on August 22. Aniplex of America licensed both anime seasons, as well as the special, in North America. American production company Skydance Media announced to adapt the light novels into a live-action TV series last August.

A manga adaptation drawn by Tadadi Tamori has been serialized in Dengeki Maoh magazine since October 2015. The first compiled volume of the manga was published in October 2016, with the second volume scheduled for release on November 10. Yen Press licensed the manga in English earlier this April and will publish the first volume on November 17.

People keep on hating while we keep on loving SAO

Ordinal Scaled was amazing and the animation was really
awesome....I’m expecting much from season3

I actually want to watch it. The last movie was quite good and entertaining, but there are always people who just hate.

Awesome news! I've been waiting for Alicization arc to be adapted for fucking years, and it's finally here! Though that means that more hate bandwagoning, yay! *sarcasm*

The spin-off novel looks interesting, though the fact that it's written by Kino's Journey's author, while I don't necessarily hate him and I do like Kino's Journey... I'm not sure what to think, but we'll have to see.

kinda hyped for this
missed kirito

I wish I understood the appeal of this show. It's a jack of all trades but a master of none and it never really took advantage of it's interesting concept.

One would think that getting out of a death trap MMO after being trapped in it for so long would be the end of it but what is this his third MMO after he escaped Sword Art Online?

I like that they renamed the series to SAO: Alicization. It's obviously going to take more than 25 episodes to cover the entire Alicization arc, so instead of making SAO III, SAO IV, SAO V, they can start over with the numbering.

I'm not sure how I feel about Gun Game Online getting it's own show. I wasn't really into the GGO arc, but hey I'm up for an SAO spinoff anyday.

MagicalMahou said:
Alicization is a pile of dogshit. Have fun with full episodes of talking.

How do you know that? Have you read it yourself? sound like a other hater.

I don't know what to think about this but I guess I will enjoy the GGO one more than the Alicization especially if there is no Kirito there.

Normies gonna enjoy this , I guess.

Apparently Alicization is SAO's best arc so I'm definitely looking forward to it :3 Hope there's gonna be a lot of blonde bishie around, he's pretty cute!

Wewlads,atleast the forum discussions will be a good time pass.

Alicization is a pile of dogshit. Have fun with full episodes of talking.

Although, I'm looking forward to that GGO thing. A take on GGO by an actually competent author? Sign me up!

But seriously though, 2 additional series for SAO? Could this be a sign that studios starting to putting in more effort in adapting popular source materials? maybe we'll finally see the over 9000 LN adaptations getting a sequel.

In other news, more material for SAO Abridged! Hooray!

Oh boy, this gonna be great.