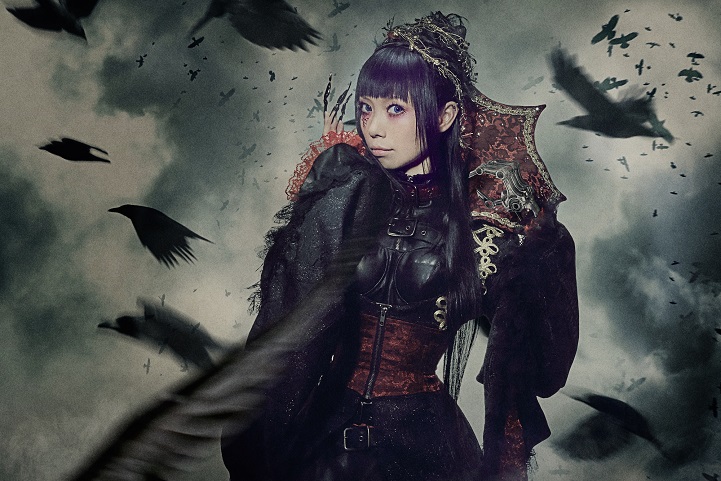 This year, gothic metal band Yousei Teikoku is commemorating their 20th anniversary. Ahead of their special performance at Otakon® 2017 in Washington, DC, in August, MyAnimeList is pleased to interview Yui, the Empress of the Fairy Empire.

Yousei Teikoku was founded on the idea that humanity's dwindling belief in fairies must be reversed in order to bring back the purity in people's hearts. It was in year 1997 in Nagoya when the Empress of the Fairy Empire, Yui (vocals), first joined with Takaha Tachibana (guitar) and named themselves "Yousei Teikoku Dai San Gakutai." Yousei Teikoku ("Fairy Empire" in Japanese) is the shortened name. They then scouted three members in Midgard, Nanami (bass), Shiren (guitar), and Gight (drums).


Out of all the songs you have performed thus far, which one would be your favorite when it comes to performing for your fans?

There are several songs that fit the criteria, but if I must choose it would be "Patriot Anthem." It is a song that allows the audience to feel the energy of the interaction between our power and their power.

How do you feel about the changes the band has gone through since its beginnings? How has that played out for the music and aesthetics of the band?

When a new wind blows into the picture, it is possible that we can see a new scenery emerge. This kind of change has been wonderful, for we have always sought change and will continue to do so. I believe we have been able to remain active on this earth for 20 years because we were able to choose new values and directions through such change.

What do you think of your first albums from the 1990s? Would you like to revisit any songs from that period?

I believe there has been a considerable amount of change in our musical character. However, I have never once looked back with regret upon the music I brought into this world. Still, I am certain there are a number of older songs that would take better form if they were reborn using our current band arrangements.

Your songs seem to be telling listeners fairy tales of a giant world with its own mythology. Can you describe how your songs are connected together?

Rather than conveying the mythology of a single particular world, my intention is to convey various different worldviews from a variety of angles. However, the mythologies of various nations closely resemble one another, and I feel that the fundamental desires, fears, hopes, and likes are all connected even though our places of residence are different from one another. (Interviewer note: In the German language, which Yousei Teikoku borrows heavily from, the term weltanschauung is used to describe the philosophy of life or the worldview of an individual or group.)

How do you feel when you hear one of your songs playing in an anime series?

When I watched our first tie-up song, "Senketsu no Chikai," airing for the first time, I recall being very moved by how the animation was overflowing with a sense of speed along with our composition.

Which anime did you grow up watching?

I believe they were works of Ghibli and Disney. I have always loved Majo no Takkyuubin (Kiki's Delivery Service).

When starting a new band, how does one ensure that it is not seen as "just another band in the genre" by the public? What do you think is the key to developing your own unique identity that will help you stand out?

Become absorbed in the things and activities you love, and creating with that same sensation of love. That is all there is. As for me, my singing is my specialty and originality. 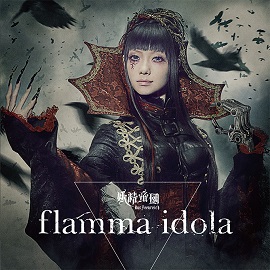 Yousei Teikoku's 20th anniversary single, "flamma idola," showcases that GOTHIC LOLITA PROPAGANDA is still in full effect and coming at you fast. It sets itself apart from their 2015 album SHADOW CORPS[e] by leaving behind the military motif. Yui's fast-paced vocals propel the listener through all three new songs in this single.

The title track "flamma idola" – a 4-minute rock anthem – sets the stage for a grand visit to the Fairy Empire. The second piece, "Veludo Papilio," turns to slightly softer rhythms without losing the intensity of Yui's vocals. Finally, the single concludes with a lively yet ominous song titled "Naikan Uchuu Shisha no Yurikago" that just loves to repeatedly switch up the pace.

Overall, "flamma idola" sounds fantastic and is a strong invitation to see the five-member unit perform live in August. The single will go on sale on May 31, 2017, and will also be released simultaneously on the U.S. iTunes Store: https://itunes.apple.com/us/artist/yousei-teikoku/id266647368

MY GOD!!!!! For ages i have always pronounced the band name as Yuusei Teikoku and always assumed it was a name, never even crossed my mind to try to translate it as Fairy Empire, shocking.

I really like their older stuff a lot better.

"It was in year 1997 in Nagoya when the Empress of the Fairy Empire, Yui (vocals), first joined with Takaha Tachibana (guitar) and named themselves "Yousei Teikoku Dai San Gakutai." Yousei Teikoku ("Fairy Empire" in Japanese) is the shortened name. They then scouted three members in Midgard, Nanami (bass), Shiren (guitar), and Gight (drums). "

This is phrased oddly. "They then scouted three members", was actually over a decade later. The way this is phrased makes it seem like they did it shortly after forming. It only Tachibana and Yui until 2010. That also coincides with when I feel like their quality went down a bit, with some exceptions (all their Mirai Nikki songs were fantastic).

Anyway, really looking forward to this. It feels like it's been forever since we got music from them

kuchitsu said:
Wow, thanks for asking my question, didn't expect it.
Same here :D
this was a good read. looking forward to see more interviews like this one.

I was waiting so long for this interview, it's finally here!
And what a surprise, my question about their old songs was selected!
I was curious what she thinks about that first period and I agree that some songs could work out if they were reworked today.

(also, I hope she learned that the question came from Poland, so she knows they have fans in Europe too :D)

I remember being very impressed with Patriot Anthem when I heard it the first time. At the time, I didn't think there'd be anime with non-pop style intros. I love it that they still enjoy performing that song.

Anyway, nice AQ! I loved to know that MAL staff gave us that opportunity!
Awesome, thanks for your contribution! =D

WOW MY QUESTION WAS SELECTED!!!

Anyway, nice AQ! I loved to know that MAL staff gave us that opportunity!

Wow, thanks for asking my question, didn't expect it.

Yui's interviews are always really interesting due to her supernatural way of talking. Yousei Teikoku is probably my favorite J-Rock band right now, so I'm really stoked to hear the new song!

Really cool to see MAL do professional reviews like this as well. I hope there will be more.

Just listened to Patriot Anthem and I disliked it. It is so metal...

I never liked gothic metal or metal songs but Tamakui is great!
Then again, Tamakui isn't very metal at all. :P