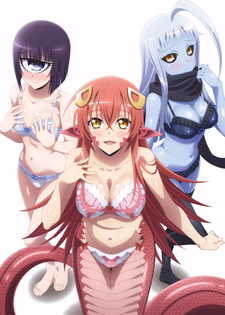 The official website of Monster Musume no Iru Nichijou has announced that the 12th volume of the manga, which will go on sale on April 13, 2017, will be bundled with a new OVA. It will be adapting chapter 26 from the sixth volume, as well as a spin-off chapter from the fourth volume of the manga. Director Tatsuya Yoshihara and scriptwriter Kazuyuki Fudeyasu will reprise their roles for the second OVA.

Monster Musume no Iru Nichijou is drawn by Takemaru Inui and has been serialized in Comic Ryu since March 2012. The 11th volume will be released on November 12, which will include an OVA that adapts chapter 17. The 12-episode anime adaptation by Lerche was broadcast in Summer 2015 and was simulcast by Crunchyroll. Sentai Filmworks licensed the anime and Seven Seas Entertainment published the ninth manga volume for North America in August.

Hopefully we get some scenes with Manako, she's underrated as fuck.

I really hope for S2 in the nearest future as the next two arcs in the manga are great (Meroune arc not do much, but still).

One of my favourite shows gets another OVA, awesome. Now I just need a season 2 :3

I need more harpies in my life.

Everyone needs more monster girls in their lives.

How about a second season instead.

Red_Tuesday said:
Considering that when I searched through the manga to find a single page devoted to Doppel there wasn't one until the deep 50s of chapters, wake me up when season 4 is here.

the first season covered the first 25 chapters. is a s2 is approved it willl catch up to chapter 50.

Also the manga has not past chaptter 50 yet..at the time of writing it is at chapter 47. dont exaggerate it.

Considering that when I searched through the manga to find a single page devoted to Doppel there wasn't one until the deep 50s of chapters, wake me up when season 4 is here.

This is great news. Even if it doesn't get a second season it can follow in the steps of other great shows that continued through OVA's.

Bless. Just waiting for a season 2 years from now.

Nice, but I'd prefer a second season.

Season 2 would be really great right about now. Can't get enough of snek and harpy.

was the first one sold that good? i don't remember see it anywhere on chart... and i don't even find them subbed in my native yet...

EDIT: just checked, they not even released yet.. make me surprised... is there a reason why?

I'm always happy to see more Miia, but I really want this second season already. >.< I just recently bought the uncensored version of the series, so I'll certainly be watching the first season all over again. XD

Awwww yeah! ^^
Looking forward to this. I need more monstergirls in my life :D

Sakana-san said:
The 11th volume will be released on November 12, which will include an OVA that adapts chapter 17.
https://myanimelist.net/anime/32698/Monster_Musume_no_Iru_Nichijou_OVA

ASTRO999 said:
How this can be 2nd ova when there is no other ova before it...???
Yeah. this is confusing.
Is this misinformation? or what?

Yes! This brings hope for a season two! Also was there a first ova? Has it been released already?

I honestly would want a second season but this is good enough. I'm welcome for more >w<