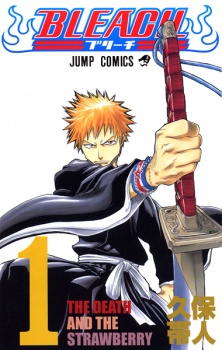 The final chapter of Bleach, which will be released in the 38th issue of Shueisha's Weekly Shounen Jump magazine on August 22, has announced that there will be a live-action movie slated for 2018. Souta Fukushi will cast as Ichigo Kurosaki and Shinsuke Satou will direct the film.

Bleach has been drawn by Tite Kubo since August 2001, and will end with 74 compiled volumes. Volume 73 recently ranked 28th in Oricon's weekly manga sales for July 18 - 24, selling 26,312 copies and adding up to a total of 387,608 copies sold. The manga was also adapted into a 366-episode TV anime, which was produced by Studio Pierrot and broadcast between October 2004 and March 2012. In addition to the TV anime, four anime movies were released, as well as two Jump Festa specials.

Viz Media has licensed the manga for North American release since 2004, under their Shounen Jump label, with 3-in-1 omnibus editions released since 2007. The 67th volume of the series was released in July.

Oh, you have GOT to be kidding me. A live action movie?

otakugirl10 said:
joe_g7 said:
otakugirl10 said:
I was expecting an anime adaptation but we instead get an live action series that most people wont see (me included) i really hoped that they would do the anime from where it left
^^^ it will probably never happen...

I'll still keep hoping that they'll give us an adaptation SOMEDAY. I don't think anybody wanted a movie, they're just doing it for money.

I'll LOL if the film ends up being really good.

joe_g7 said:
otakugirl10 said:
I was expecting an anime adaptation but we instead get an live action series that most people wont see (me included) i really hoped that they would do the anime from where it left
^^^ it will probably never happen...

otakugirl10 said:
I was expecting an anime adaptation but we instead get an live action series that most people wont see (me included) i really hoped that they would do the anime from where it left
^^^ it will probably never happen...

H-X-H said:
From the bottom of my heart. No Thanks!!

First it loses a lot of its popularity, drags out the final arc that sucked ass, rushes the ending, finishes with a final chapter without answering anything and now gets a live action movie instead of an animated series of the final arc.

That was the last nail in the coffin for Bleach, and I doubt it will be remembered in decades to come now.

I wonder why they keep making them? Are they that popular in Japan?

What the hell, I think I need go to hell along with the Anime and Manga more than watching this crap unless the characters and story are look exactly same with the Anime/Manga.

I can only imagine how much CGI the live-action movie will require.

Going to watch it for the lulz. xD

Can't wait for when they start doing the other big shounen titles and try to get money from em. xD

wow, I'm in shock, both Gintama and Bleach live actions so soon :o

The shit level will be higher than Naruto's fan base... Its infinite shit

We all know how this would turn out. Just give me an adaptation of the final arc and not crap like this.

I'm not a big fan of Live Action anime movies since how much they have screwed up in the past, I wouldn't mind it if they do a great job and follow the story correctly but still I really wish they wouldn't do it.

A. Continue the Bleach anime to tie it all up there too

B. Kubo would make a manga following the children of the bleach protagonists

(also I wish I could've read the manga but sadly I really couldn't afford them so I missed out on the manga but the anime is still my number 1 fave anime.)

I hope they don't mess this up like they did SnK because that was terrible.