by Sakana-san
Jul 10, 2016 2:29 PM | 15 Comments
Here is a collection of promotional videos (PVs), TV ads (CMs), and trailers for the last week. This thread excludes videos that have already been featured in an article. Please check the News Board, under the Preview tag, for articles that feature a promotional video. Last week's PV thread can be found here.


Ajin OVA | OVA | PV2
Kodansha has released the second promotional video for the OVA of Ajin. It will be bundled with the ninth volume of the manga that is scheduled to release on October 7.

Going only with Trickster.

Will be my first time hear Gackt voice a character, and sing in general. Well, since I know he's famous and I've never checked anything from him at all, I think this is quite the chance to witness his talent.

Ajin OVA is intriguing. Is there any info on what it covers?

Gantz:0 continues to look freaking great. This is some Garlock level of animation quality. If only we got entire manga in form of movies like that...

Trickster continues to look promising. The animation looks nice. Hopefully it manages to capture the bizarre surrealistic style that Ranpo Kitan did pull off, but also manages to have a comprehensible story, which Ranpo Kitan did not manage to.

A bit disappointed that Fiend of Twenty Faces seems to be just a pretty boy this time. If there was one thing Ranpo Kitan did extremely well, its character designs for Edogawa Ranpo's characters.


Fiend of 20 Faces in Trickster Fiend of 20 Faces in Ranpo Kitan 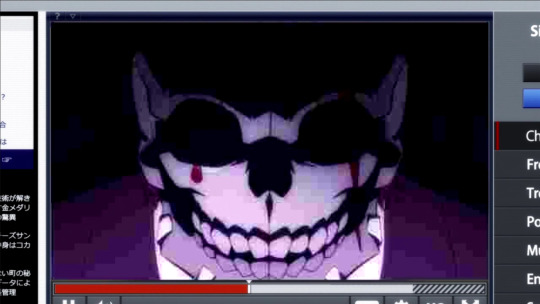 Then again maybe this dude is just a stand-in for a twist reveal of the real one?

The Ranpo show is going to be bad again. A shame.

Fell in love with Trickster *_* main character hot and amazing op. Seems sad but I will see

Lol at these drama queens hating on Ajin. I don't care what people say, the CGI in Ajin wasn't even that bad. It wasn't stellar, but it wasn't horrible.

Wuaaaaoa Shounen Tanteidan was already awful from PV1 but it just looks worse and worse, didn't think it could get worse from PV1 but I was clearly mistaken...

Gantz is pretty slick tho o:

So much hate for Ajin. Weow.

Don't care much for the Ajin ova anyway, but can't wait for its second season. Gantz CGI was pretty damn good... Maybe I should watch the series.

Mm, I'm curious to see that Gantz movie in the future.

Gantz:O : this is what i call CGI
go fuck yourself ajin

What is this sorcery

Gantz:O is an example of how CGI should be used in anime. Either go high budget or go home.

Samael said:
Gantz:O hype is real
exactly i am surprised by the animation looks way better than typical 3d like Ajin or better.