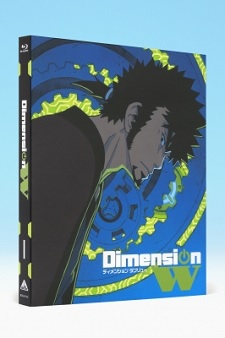 The cast members of the Winter 2016 anime Dimension W announced at AnimeJapan 2016 on Sunday that the sixth Blu-ray volume of the series will include an unaired episode. That volume is scheduled to go on sale on August 26 and is priced at 7,000 yen.

The first Blu-ray volume (pictured) containing the first two episodes of the series was released on March 25. It included a three-minute short anime titled W no Tobira Online, also to be included in subsequent Blu-ray releases. Dimension W ended its broadcast at 12 episodes on Sunday night.

Dimension W is an adaptation of the science fiction manga drawn by Yuji Iwahara. The tenth compiled volume also went on sale on March 25, and the first English volume by North American publisher Yen Press went on sale on February 23.

One of the most disappointing anime of 2016 (and it's early!) I have low hopes for an OVA.

Crashmatt said:
Seky said:
Erased and Dimension w are the worst adaptations of the season.

I saw divine gate and play your game, and anime is very faithful to the game.
Natsuko Takahashi always does amazing adaptations.
You can not give an end to anime because they always appear new characters and stories. And the information is gradually revealed. The game does not end.

Seky said:
Erased and Dimension w are the worst adaptations of the season.

Erased and Dimension w are the worst adaptations of the season.

Mhm... rush the series and then make a disc release extra. Gotta love that kind of approach to source material.

GoldenDevilGamer said:
I'm wondering if this will take place after the events of the anime or in between.
They used up all but the last few chapters (74/77) of source manga so I expect it will be something they skipped from earlier or an anime only fanservice episode.

Cool, more Dimension W sounds like a good idea. Been enjoying the series from Winter.

GoldenDevilGamer said:
I'm wondering if this will take place after the events of the anime or in between.

I hope it's after the anime, like a 13th episode.

Or maybe it would be better if it showed comething that happened in the past, that could tell us more about the story.

I thought this anime was all right, so I suppose this is good news.

I'm wondering if this will take place after the events of the anime or in between.

Id rather them add blu ray animation fixes. First episode was beautiful and it went down hill from there.