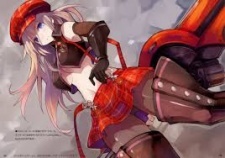 Seky Jun 14, 2016 11:21 AM
You're a liar and a novice. I did gif. I read the manga and not skipped anything important in the first season. And what you tell me note that not read the manga. He's just assuming things because never read a manga or a novel.

-For your information a manga of 15 pages for chapter, several chapters of the manga used to cover a chapter of anime. Novice

and I can say with certainty that are maladaptive, and that the first season tokyo ghoul has much better adaptation to those other aforementioned animes, and the first season of Tokyo Ghoul had a good adaptation. Any other person who has read, but really these mangas or novels, you'll say the same as me. Mr. novice.

-With respect to animation, it seems you did not see the anime or downloaded in a poor quality. I say that was good animation, it's because I had, I also did the animation gif on page http://giphy.com/ there can not fix the colors.

-Download the anime here https://rokuhotorrents.wordpress.com/2015/02/13/tokyo-ghoul-season-1-complete-uncensored-bd-1280x720/
And show me a gif done for you where you see bad animation.

-Now when people ask him because I put a note 4 to Tokyo Ghoul, You tell them that you just do not like that anime. Do not say it's a bad adaptation because the first season is a good fit, and the second season was announced as an alternative history http://www.animenewsnetwork.com/news/2014-10-11/tokyo-ghoul-2nd-anime-season-video-teases-new-story-by-creator/.79825 And it shows than ever to read manga tokyo ghoul or other. And you put good notes maladaptive animes.

It is very obvious that you did not read these light novels or those mangas, if I read, and I can say that Tokyo Ghoul's first season has much better adaptation above those animes. An example Yahari 10 novels adapted into 26 episodes of anime. Also check your animelist and not read those mangas and those light novels. 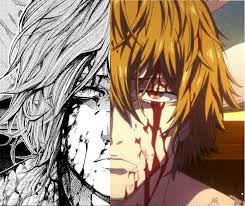 Teixe Apr 21, 2016 6:17 PM
I read and watched some of them but they dont matter. TG could be good but they chose to butcher it, 70 chapters in 12 episodes really couldnt work. Also the animation was really bad, i make gifs in my spare time so i have a good understanding of good and bad animation and i can say that TG had really poor animation, the studio that made it didnt even try.

Teixe Apr 5, 2016 5:16 AM
Manga is good while the anime adaptation was really poor, low budget, too rushed, things made no sense at all.

E-Mand Apr 4, 2016 10:14 AM
-Have i ever said that :re would get an adaptation?
-You're in the industry? Nice. Sounds good Studio Seky
-The 'plot' is still the same, the way that it is portrayed is diffrent
-And the problem with canonficial filler is...?

E-Mand Apr 4, 2016 9:22 AM
Yes, yes i did, and i was a pleasure.... or something on the line of that. And i'm not saying that you're wrong with :re not being able to be adapted after √A, but the fact that you yourself said that Pierrot and Ishida made √A so that they wouldn't have to adap :re is bullshit and has no cover of information, it's either your stupid tumblr. theory or you trying to sound smart about the anime industry.
What i'm saying that isn't right about your comment is you not calling √A and adaptation, since it is. Sure the story is somewhat original compared to it's source material, but does still fall under the category of an adaptation. Since, the characters are still behaving the same as they did in it's source material (though, Kaneki's perspective of the oucurring events are diffrent). The story all in all story-line isn't diffrent, it's as i've said before, another perspective or a 'what if' scenario of what really happend in the manga.
And a fallback on your first comment. Quote "Who wants to see Tokyo Ghoul re adapted when the first 60 chapters of the manga are canonical stuffing? It would be a full season of only fill." Describe to me what you mean by filler, since you don't seem to know what that actually means. The first 20 or so chapters are character introduction and charactor bulding, for the viewer/reader to get comfortable with the charactors. The rest of the chapters are cannon to the story. None of it is filler.
So i'd gladly hear your view of: 'what makes a filler a filler'

E-Mand Apr 1, 2016 9:49 AM
I guess you can't neither understand proper english and take a hint.
The story isn't original in √A, it does however follow the story in another perspectove, therefore making the story somewhat original but still not entirely an original story, since it takes moments from the manga and puts them from as i said earlier, from another perspective. This does not mean that it is a original story nor does it make ait a fram by fram adaptation from its source material. I guess the better way to describe √A is, it being a representation of what the story could have been or as it's been called since teased; a 'what if' take on the manga.
And no where has there been a reasoning for this, so your assumption of Studio Pierrot making this storys form of version so they'd not have to make an adaptation of :re is false and therefore, stupid.

E-Mand Mar 29, 2016 3:24 PM
Guess you're either a really unoriginal/bad internet troll or just stupid in your way.
So i guess the answer would either be; "No comment" or "word."
So i'll just leave it at that before you start with the Damn Daniel or HISSSSSSS

E-Mand Mar 29, 2016 1:22 PM
As long as the product follows its source material or just uses elements from the source material like; characters, story line etc. then the definition used for that is an adaptation.

You've been fucking myspace for centuries or something fam?! How come you not know the the meaning of someone saying k...

but... explanation of the use of k:

E-Mand Mar 29, 2016 10:07 AM
Depends on who you might refer to when you say 'he'.
If the case of your grammar being so bad that you are talking about me, then i think that your question might be answered by the last comment i've made on your profile that clearly shows that i acknowledge your first comment on my review of the Tokyo Ghoul anime, which to my defend was pretty poorly written(my review of course), had a lot of typo's and didn't really showcase how i REALLY see the anime. But as the gif shows a magical K. appear i think you get the message behind the letter.

If you still can't take a hint, then...
TL;DR: Yes, i am(or he) going to respond, or rather i've already done it. And the response still remains K.
All Comments