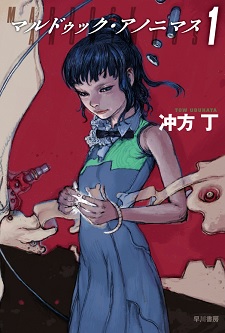 Publisher Hayakawa Shobo has announced that it will release a sequel of writer Tow Ubukata's 2003 science fiction novel series Mardock Scramble. The new work, titled Mardock Anonymous, will have its first volume published on March 24, 2016.

Mardock Anonymous is set two years after the events of Mardock Scramble. Ubukata also previously wrote a prequel series titled Mardock Velocity in 2006. Katsuya Terada, who drew illustrations for the previous novels, is returning to work on Mardock Anonymous.

Mardock Scramble is the winner of the 24th Nihon SF Taisho, an award for writers of science fiction comparable to the American Nebula Awards. It was adapted into an anime movie trilogy in 2010, 2011, and 2012. The combined novel series has a reported circulation of 700,000 copies.

Synopsis
As Balot continues her pursuit for knowledge, Oeufcoque is once again resolving incidents with his new partner Rock and others. One day, Easter's Office receives a protection request from Kenneth C. O., the childhood friend of lawyer Sam Rosewood who is a whistleblower for a certain corporation. Oeufcoque and Rock's investigation will lead them to a new force in the city, the Quintet.

The adaption was a fine work of cyberpunk id suggest people to watch it if they are into that. Also the animation was beautiful. There is enough unique ideas and originality which most ppl have been crying to see.

Like Zhou above I also haven't finished the books, read the first one (and damn was it good) but not started the second yet. Hope these get licensed, more companies willing to publish LNs now than before so you never know.

Ah, I still haven't finished the novel. Hope the sequel gets licensed too.

Hmm, I might give the LN a try, been reading a lot of those recently. Vaguely remember the films from what I've watched though.