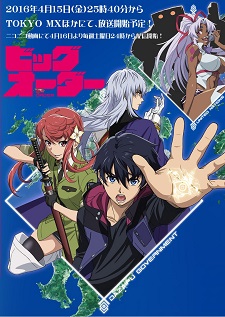 An official website has opened for the Spring 2016 anime Big Order, revealing a key visual for the series. The full cast members and production team were also announced on the website, which is hosted on the same domain name as the 2011 Mirai Nikki TV anime. Both series are based on the manga by Esuno Sakae.

Big Order will begin airing on Tokyo MX on April 16 at 1:40 a.m. The series will also be streamed on Niconico beginning April 17.

Not expecting much from this thanks to Mirai Nikki lol, well at least I hope we get some decent action here and there.

The return of the prodigal son! Bless us for being able to witness another masterpiece in the making yet again.

Also, uploading the site on the same domain hints something. It can't be unrelated if it is placed together ain't it?

Hope it's not as disappointing as Future Diary. However, based on what I saw from the manga, I can't have high expectation toward this show.

Me, looking at the cast list: Oh, this looks boring. Nobody I care about at all.


Kokudo Soumoku: Norio Wakamoto (Ginga Eiyuu Densetsu)
HOLY THE FUCKING PHONE IT'S WAKAMOTO FUCKING NORIO. I might have to check this out depending on how much he's actually in it. G-God damn you, Wakamoto ;_;.

Sadly the only other series the director's done has been complete shit. But since it's been years since Oretachi ni Tsubasa wa Nai., I'll give him another chance maybe.


tragedydesu said:
i know there is a lot of anime rip off from others
but the same character design ? never seen that before
You must be new, lol. Also it's the same mangaka, a lot of them are only so creative with character designs after all.

i know there is a lot of anime rip off from others
but the same character design ? never seen that before

Ayahito Sundan: Yuu Hayashi (Haikyuu!!)
I'm just happy to see this guy in a new role, one of my favourite things about the Haikyuu!! anime adaptions is Yuu Hayashi as Tanaka.
so much life for such a boisterous character, and such a varied voice too!

tetrix1993 said:
You got the opening theme's title wrong. It should be "DISORDER". YUI is the lyricist.

Wow, because the title is "Big Order".
And Mur Mur became hot :O

Every time I see Morita san on any voice acting role I just feel sad. Super miss my Ichigo T_T He did a great job voicing him. Miss hearing him as Ichigo. You better come back Kurosaki Ichigo

tetrix1993 said:
You got the opening theme's title wrong. It should be "DISORDER". YUI is the lyricist.
This has been fixed. Thanks.

You got the opening theme's title wrong. It should be "DISORDER". YUI is the lyricist.

DatRandomDude said:
Well ... even if it turns out bad, at least its gonna be entertaining.
True, I'll watch this.

Gluzin said:
I heard it was even worse than Mirai Nikki, I might watch to have a laugh.

Das me.
Well at least I can expect for a good opening, since I really enjoy Yousei Teikoku

this is boring, doesn't have a lot going for it.

Norio Wakamoto
And that is the reason why I'm going to watch this series.

Eh, I'll watch it but I'm not expecting much. I read this up until the boat arc. It's not a terrible series but it's ridding on Mirrai Nikki's coattails way too much.

Well ... even if it turns out bad, at least its gonna be entertaining.