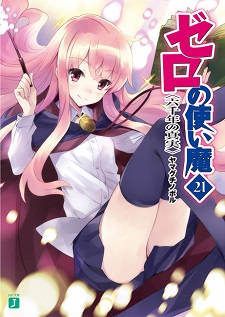 i love ZNT.. I miss hiraga saito and Lemon-chan.

It's been 4 years since the author's demise. Finally the ZnT series -my favorite series during teenage - can have a proper ending.

I love how all the KonoSuba sales are right next to each other. It just made me happy to see all the volumes are in the ranking lol.

aye nice shield hero on there

If it sticks to the original plan there's only 1 more volume to come so if they did it probably wouldn't be to boost sales of the light novels. Plus 9 years since the last anime...
Eh? Last ZnT season was in 2012

Whoops sorry I was looking at the first one for some reason. I should have known that was wrong...

If it sticks to the original plan there's only 1 more volume to come so if they did it probably wouldn't be to boost sales of the light novels. Plus 9 years since the last anime...
Eh? Last ZnT season was in 2012

If it sticks to the original plan there's only 1 more volume to come so if they did it probably wouldn't be to boost sales of the light novels.

@NeoAnkara
Eh not really,there are tons cases of being transported for instance
Risou No Himo Seikatsu
Seiun wo Kakeru
where the mc has neither cheats/power nor is their goal the same as say Arifureta's(even at first). All they have is just their knowledge from the previous world.

Which reminds me Ochitekita Naga to Horobiyuku Majo no Kunifrom the list, should fall under that category as well.(and this is even a 'senki' type series and a good one at that, despite the synopsis).

But yea I do see your point in general about fantasy. There are a quite few series that I also think would've worked better as just a fantasy series from the begining.

Highest threshold in quite a while this week from what I can tell. If the sales are keeping up it could be back on there again next week as there aren't any big names out.
That said, there are several things that could get around 10k sales, which are (unusually) skewed towards the start of the week, and the MF Bunko J releases will still be up there, so I wouldn't bet on it

@barmar
It's not like there are lack of diversity it just that their initial goal is the same at first most of the time. That's mostly the case for the one that are send there not reborn though. There are also the concept of "cheat" that I don't like and an example here on the list is Arifureta that I've read.

And there are some I like as well like Zero no Tsukaima, Ikai Shinki to Reunion and certainly there is more. Just personal preference that I would have them to be flat out fantasy from the start.

@NeoAnkara It really depends on the series. You and well many people might not like them but what you're saying is quite wrong as well. If there's the one thing the current tensei/isekai series have going for them is definitely the diversity. It's exactly because of that imo that so many of them are popular.

Also the thing you mentioned about wanting to get back....is simply not true, most of them in fact have the opposite goal or have a completely different one, even in the begining ,like take something amusing as:
Ouroboros Record
MC here is simply too afraid of death. He died and got reincarnated but it seemed to be a terrifying experience which left him with a trauma. So even if he got reincarnated once MC has no idea if it'll happen again so he wants to attain immortality at all costs no matter what or who must be sacrificed. For that purpose he starts dabbling in alchemy begining his research at a young age, followed by lots of schemes and intrigues.

Or for example lets take some of the series from this weeks list:

The plot , MC's/cast , their age, motives, style almost everything is completely different.(Magi for example is mostly a crafting type, speaking of which there are tons of isekai/tensei crafting stories and town management ones as well with totally different aspects)

Even one of the newly published series from todays list which is mildly adventure/kinda lighthearted/parody is still quite different from the rest.

A series where a middle-aged salaryman MC who after buying lottery tickets gets hit by car and the last scene he sees is a kissing couple inside of it(kek rekt by life). So after getting reincarnated as a dragon(a real one yes) he lives deep inside the forest(almost peacefully) with some slimes that he is protecting. After some of them are killed by the invading demons he massacres them in return and goes after the demon lord...and so on.

Now I'm not even going to list those with multiple or female MC's, survival/military,cooking type isekai/tensei series, or heck some of the really disturbing ones. But while there definitely are some copy/pasted series, the one thing I can say about the 'genre' for sure is that it's variety is regardless, still huuge.

Also wew that Konosuba domination. When it was first announced I definitely didn't expect the above results.

FallenDesire said:
*3. 20,871 *20,871 Seirei Tsukai no Blade Dance Vol.15
12. *8,198 **8,198 Magika no Kenshi to Vasreus Vol.11
Fab to see Blade Dance and Magika no Kenshi up there again. The latter is surely ripe for an anime adaption at some point, announcement this year I'm hoping / praying.
It won't work for Magika if anime cover up more than 3 volume after all there are no place for break once they enter on volume 4.

Being a lover of comedy is such a good feeling. No matter what the current craze, there will always be comedy in some form.

'Course, I love plenty of other stuff too.

My personal preference but I find magical school more interesting because the goal have more variety when most of Isekai goal is to return to the former world. Of course the mean my vary later but nevertheless that's still one of my peeve of Isekai in general.

Being a lover of comedy is such a good feeling. No matter what the current craze, there will always be comedy in some form.

'Course, I love plenty of other stuff too.

NaturalPerm said:
More than half of these titles are Isekai or thrown into MMO stuff.
Variety isn't popular for LNs at the moment.
LNs are never that diverse when it comes to what's currently trending really.