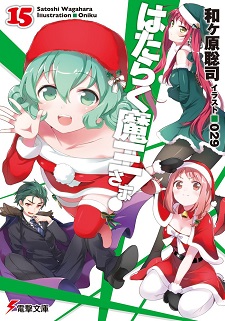 chrisbj said:
People say Index fell off, but didn't durarara used to sell in the 200k range, look at it now, how did that happen...

That was all during the crazy anime boost it got (and it was in the 300ks). Bear in mind that only SAO has ever matched Durarara!!'s anime boost - Index's boost wasn't even visible (thresholds were much higher then due to there being fewer rankings but that affects Durarara!! as well). Only a couple of series ever have had regular rankings of backlog sales during the anime boost and then continued to achieve those sales afterwards, and those were generally ones that either got more anime that succeeded in boosting sales again, or that didn't make anything bigger than weekly rankings from the sales boost.

Comparing sales now to gains from an unprecedented sales boost in one series to sales now against sales well after the anime aired for another is not a good measure.

The only really big drop in that time that aren't explainable by other factors was between vols 10 and 11. SH 1 to SH 2 is also notable. On the other hand, Index has had a couple of very big drops with no obvious reason behind them at all.

But yes, both series are a lot lower than they were in the past.

* a long gap always reduces sales - for comparison Index has never had a gap of more than 9 months, and none longer than 5 months while its sales have been dropping
** Index technically did as well, but from what I gather that's more of a direct continuation than Durarara's and also the biggest sales came AFTER the switch to the new series - Index 22 to Shinyaku 1 actually saw sales go up.

People say Index fell off, but didn't durarara used to sell in the 200k range, look at it now, how did that happen...

wow, konosuba anime really hyped the LN, didn't thought that it would climb so many positions.

Laughing at some people thinking that Konosuba is just run-of-the-mill harem series when there's more than that, anyway this series is a huge success in terms of LN sales and even the BD sales estimates and I'm happy with what I'm seeing so far, smells like a sequel is about to come very soon.

GoldenDevilGamer said:
Hongu said:
Man, the Japs sure love KonoSuba. Guess harems will never die out, eh?
TheHatredDMC said:
So Kono Subarashii Sekai ni Shukufuku wo! the top series: is a Harem? *Sigh*
KonoSuba's much more than a harem. It's primarily popular because of its comedy.
Specifically, KonoSuba is a comedic PARODY of "trapped in a game" harem light novels and anime. So people who complain about harems should ENJOY it, as it is making fun of the genre and it does a great job at that while at the same time creating some very enjoyable characters in their own right.

The 10 TV episodes + 1 OVA on the next novel in particular is the KISS OF DEATH lately. This publisher commonly does this 10+1 and done adaptation formula.

YAAAY!! KonoSuba's boost is Wonderful, Keep it up dear!!

The cut off is in 4724 one(bunko ranking), not the ranking that with 1957 sales, according to Kuudere.
Not quite. There's also a Top 20 Light Novels ranking, with a threshold this week of 4537


Maybe this ranking thread should also start posting series ranking?
The series rankings usually come out a couple of hours after the volume rankings (at least on the website, not sure about youtaiju) which could be why.

Just like many other still waiting for that 2nd season of Hataraku Maou-sama! ^^ and konosuba rulling the whole list another week, the anime gave really a huge boost as it seems, just sad that we only gonna get 11episodes for this 1st season :( anyway hoping for a future 2nd season perhaps will see how the BD-DVD gonna be.

Now if only a certain anime can finally gets it's much deserved second season.

Kono Subarashii is everywhere on the rankings

So much KonoSuba! Love it!

Gensan said:
well well, half of the chart is KonoSuba.. good good.

Hongu said:
Man, the Japs sure love KonoSuba. Guess harems will never die out, eh?
TheHatredDMC said:
So Kono Subarashii Sekai ni Shukufuku wo! the top series: is a Harem? *Sigh*
KonoSuba's much more than a harem. It's primarily popular because of its comedy.