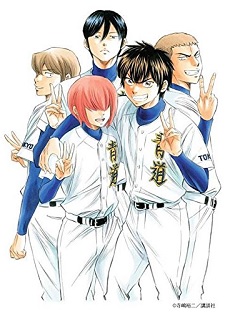 The Diamond no Ace: Second Season anime has been airing since last April, continuing the story from the first season, which aired between 2013 and 2015. They adapt Yuuji Terajima's baseball manga Diamond no Ace, which has also previously bundled OVA episodes.

The first Diamond no Ace manga ended serialization in Weekly Shounen Magazine in July, and the story continued in Diamond no Ace Act II in September. The series follows pitcher Eijun Sawamura and catcher Kazuya Miyuki as they strive to reach the high school baseball tournament Koushien.

You can watch OVA 2 in English subbed here: https://www.youtube.com/watch?v=wQNtbD9VBlU

However, OVA 3 hasn't been subbed yet

Have the last 2 even been subbed yet. I've been searching over the past year and can only find the first one lol. Probably wont end up watching these.

MeinKaiser said:
LOL @the series synopsis,
its supposed to be like this

The series follows pitcher Furuya Satoru and catcher Kazuya Miyuki as they strive to reach the high school baseball tournament Koushien.
MeinKaiser said:
LOL @the series synopsis,
its supposed to be like this

LOL that made me laugh so hard!
But I feel you pain buddy!

More Diamond no Ace is cool, maybe we'll even get another season in the future.

Why with the OVAs? Just add them to the TV series to replace the horrible recap episodes...

Nice, more OVAs to that will take years to get subbed :>.

LOL @the series synopsis,
its supposed to be like this