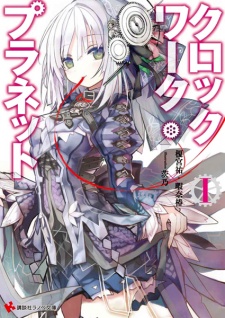 According to an announcement from the official website, an anime adaptation of light novel Clockwork Planet has been green-lit.

One day, a black box suddenly crashed into the house of the high school dropout Naoto Miura. Inside it was a female automaton. The endless cycle of failure and success.

The world that does change and the mankind that does not change. At a time where reality and fantasy are screaming, the encounters of these two make the gears of fate move! (Source: Amazon)

Clockwork Planet is a light novel series written by Tsubaki Himana and Yuu Kamiya and illustrated by Shino under Kodansha Ranobe Imprint. It currently has four volumes published, with the fourth volume to be released on December 29. It also received a manga adaptation with illustrations by Kuro.

Im hyped for this, the manga is great and its written by Kamiya Yuu.
Hope this turns out well.

@BRabbitWaifu
legal issues? I think you don't know anything, as there was no legal issues.
Also, anime for novels are just an advertisement, and a costly one. The point isn't to adapt the whole novels into an anime, but to adapt just enough to incite peoples to buy the novels. Most novels adaptation never get a sequel you know. And those which does still never get "finished" and still require you to read the novels to know what happens next.
Last thing, usually it's not the author who decide if there's going to be an anime, but the publisher side. So he doesn't "dare" to begin with.

Okay BlackRabbitLover here and No Game No Life fanboy here I just need to say how dare he! HOW DARE the creator get another anime adaption when they left us balls dry and craving more of No Game No Life? I know legal issues he was facing and etc. but he dammit! Why. I'm glad. I know Clockwork Planet is going to be amazeballs but nonetheless he needs to get off his ass and request a season 2 of No Game NO Life! Period... thank you

Why did almost every manga/LN that I'm hype for got the possibility of a crappy studio?
Still gonna watch every single one of them *thumbs up*

Viz said:
Eh okay. Not sure what to expect since I find the manga version is somewhat average. Still, the first few chapter was a fun read.

There're english translations of the LN floating around. It's way better

enginesofdemise said:
Hongu said:
Here's another synopsis:
"The Earth had died a thousand years ago. It was rebuilt using gears by a mysterious man named "Y". In the present, while Naoto Miura is living his life as a high school student and a gear enthusiast, a box crashed into his home. In the box, is an beautiful automata girl, RyuZU. This encounter would then have a profound effect on both Naoto and Society itself."

CLOCKWORK.
It's automata, not robots.
And no, it's not set in high school. The main character go to school. That's all.

Hope this changes your mind ^^

She isn't a loli though.

I tried this LN, but it was really really boring. Uninteresting characters and plot. At least, there's Bahamut next season.

I have read some of the manga, maybe I should read the LN too. I really do love the character design and I hope that I will enjoy watching this too. However, what I dread is the fact that it will be 12 episodes long where in most cases, leaves ever so little time for plot development etc etc.

Mayuka said:
That title makes it seem interesting!
^This pretty much. Yuu Kamiya being one of the writers is also interesting. I'll wait for more info on it though.

Has a loli so why not?

Already read some of the manga and I think its great, but I never expected an anime! SUPER HYPED RIGHT NOW!!!

ex_necross said:
"Girl falls out of the sky"


REALLY?
You're overreacting for an initial setting. You, and lots of other here. There's no point in having a very original setting if the author don't do anything interesting with it later on. For example, elitist usually like LOGH, right. LOGH has an initial setting which isn't original at all. Also, I like RnY which has the beginning starting like your completely cliché heroic fantasy setting.
On the contrary, what's important is what the story becomes afterwards.
I heard good things about how it develops afterwards, but haven't reading it myself, so I won't make any comment as long as I haven't read it.

Simply, I'd rather have something starting with a normal setting and movbing on into something interesting than an author banking everything on an original setting for the synopsis to attract readers, yet not doing anything good with it( most of the "very original" stuff ends like that in novels).

Hell, Sukasuka, which is one of the best new work from Japan I've read this year, has its first chapter starting with exactly that. Girl falls from higher ground and is being caught by MC. Cliché? Sukasuka couldn't be further away from cliché stories. And honestly, falling from the sky or not wouldn't have changed anything to the story afterwards. So who cares for that kind of details, honestly.

Also I love how people react to the LN adaptations than the actual content inside :S It's so damn funny.

But I'm really excited for this one then. Synopsis seems interesting enough.

ex_necross said:
"Girl falls out of the sky"

Do you prefer guy walk into a girl changing more?

"Girl falls out of the sky"

I really do hope it can match the enjoyment factor of NGNL
Gotta love how people react to a LN adaptions as more generic than the usual LN plot especially on MAL.

dirtyuncle said:
The idea is really unusual. I mean we're talking of an entire planet made with gears. There's potential for some amazing visuals. I hope a good studio picks this up.
This. I'm also looking forward to how they showcase the world and various locations.I feel whoever adapts can take a good advantage of that.

Interesting plot and title, count me in.