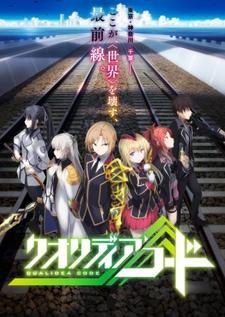 It was announced at Jump Festa 2016 that original anime Qualidea Code will be premiere in 2016. A new staff group named Speakeasy, which consists of Sou Sagara, Koushi Tachibana, and Wataru Watari will create this original anime. The announcement also revealed a key visual, staff, and preview. The cast members will be revealed in the near future, according to the official site.

Synopsis
The story takes place in a world where people continue their war against the "unknown"—the enemy of humanity. Children who have been evacuated to a cold sleep facility during the invasion by the "unknown" several decades ago wake up from their slumber and learn that their bodies developed some supernatural forces. In order to protect the country from the "unknown" emerging from the Tokyo bay gate, the boys and girls wage battles in the defense the cities of Tokyo, Kanagawa, and Chiba. (Source: Official site)

this looks really good with nice character designs and music. I hope the writers don't screw this up with a generic plotline and stupid story...don't this to be like Chaos Dragon

3 RomCom Directors/Authors in One Anime as Script Writers? ARE YOU F'N KIDDN ME?!

When 3 creator romance combined.
And result a action story? and nothing about romance.
maybe it is something new.

Looks interesting atleast, will give it a try for sure.

The music in the PV was really good it looks kinda generic though.

But having 3 famous LN authors throw a handful of their already existing characters into a universe and then trying to write a coherent story around them just screams bad idea and a train wreck waiting to happen. Nothing about that seems like it's going to be successful.

Want it to be good, but I know not to get my hopes up. At least the visuals will be awesome.

I will give this a try!

Is this related Kuzu to Kinka no Qualidea ? Both are collaborative works of WW and Sagara (this one also got DAL author though), but premise-wise they are totally different.

Eh aside from the music, it's pretty bland and looked like your typical LN battle harem stories. Well i'm probably still gonna check it later

Wataru Watari? What happened to Qualidea?

edit: PV actually looks good and music was bomb
i take that back
amen
LOL

A-1 Pictures and especially Watari Wataru is what piqued my interest here. PV looks pretty good. That music. Staff looks decent too. I'm looking forward to this one.

What is up with the main guy having this powerful arm thing now I
ve been seeing this more often and I not the only one that sees the main character with an arm power thingy????

Also REAALLY worrisome that the hack who designed ufoub character designs is back. Will characters look like furries or rhinos again?

But, not really looking forward for this one.

Looks like the same "magical highschool" garbage we get every year. Pass.

Shit sounds so vague.. The plot sounds like just an excuse to animate fight scenes.