by Snow
Jun 27, 2016 12:23 PM | 78 Comments
In this thread, you'll find a comprehensive list of anime acquired for simulcast release during the Summer 2016 season. Anime series licensed for home video release can be found here.

This post will be continuously updated as more simulcasts are announced. If you have a series that we are missing, please feel free to post it in this thread.

cjkira99 said:
Amazon Prime looks to be streaming Battery The Animation...
It's also streaming on Prime in the UK too: https://www.amazon.co.uk/gp/product/B01IE98MSU/ref=pd_cbs_318_5

Amazon Prime looks to be streaming Battery The Animation 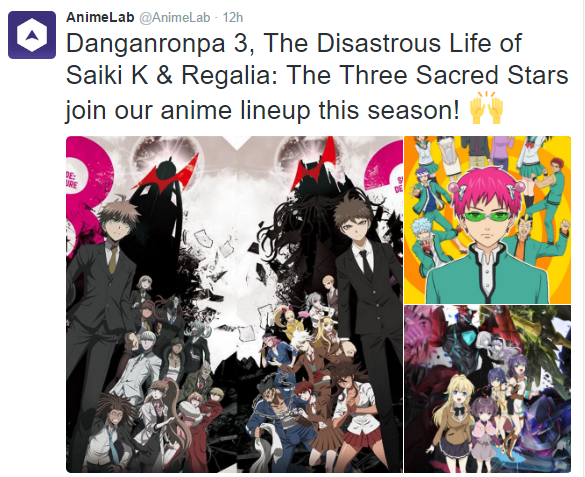 Kind of pissed that the season Funimation picked up Love Live Sunshine just had to be the season where they decided 'You know what? Let's not announce our broadcast dub plans early!'. It's not even entirely clear whether they have full rights to the show at this point. Still, Sly from Madman has said that if Funimation do decide to give the show a broadcast dub it will definitely get put up on Animelab. Which is good news to me.

Speaking of Broadcast dubs, hoping the Show By Rock shorts get dubbed. Show's pretty mediocre but the dub is probably one of Funi's best broadcast dubs so far. Apparently they plan on dubbing all the songs for the Blu-ray release. I'm really excited to hear them.

One plus side to Funimation getting Daganronpa 3 is that Natalie Hoover, who played Sonia Nevermind in Danganronpa 2, now lives in Texas. And judging by her Twitter she seems more than happy to reprise her role. On the other hand, I can't say I'm looking forward to hearing Hagakure's Wild Stallions drawl or Greg Ayres' Gilbert Gottfried impression again. So my thoughts are a bit mixed.

Tales of Zestiria the X

Daisuke has Rewrite now too.

So blessed to have Love Live! Sunshine!! on Crunchyroll in the UK. & they also got Food Wars! 2 & Magical Boys 2 so that'll last me for the summer. Will get round to Cheer Boys!! & orange after they've finished airing.

B-Project: Kodou*Ambitious, Bananya, Hitori no Shita: The Outcast, New Game!, and Masou Gakuen HxH have been added to the CR lineup.
Updates are based on the announcements made at the CR panel.

Really surprised that no one has posted anything about Funi streaming Planetarian.

And I'm really surprised they picked that up. I hope they get the movie too!

Crunchyroll announced the addition of momokuri to the summer 2016 anime lineup, just in time for the first episode to stream. Episode 1 is now available, and starting with episode 2 the series will launch Fridays at 6:30am Pacific Time.

Times listed for some of the Funimation streams:
http://www.funimation.com/p/summer

God damn it. Kissanime it is then.

kuuderes_shadow said:
Crunchyroll has Love Live! Sunshine in the UK and Ireland (sublicensed from Anime Limited)
http://www.crunchyroll.com/anime-news/2016/06/30/crunchyroll-to-stream-love-live-sunshine-in-the-uk-and-ireland
Ugh. I can't believe FUNi gets the rights for it. The only upside is that FUNi translates the songs unlike CR for the most part. Going with fansubs with this one anyway.