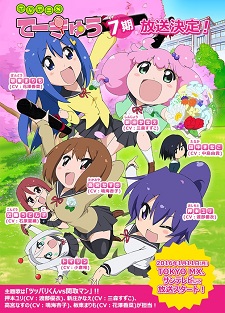 A seventh anime adaptation of the comedy manga Teekyuu was announced via a live-stream hosted on Niconico Live. The stream also announced that cast members will reprise their roles from previous seasons, while Shin Itagaki will return as the director, script writer, and character designer at studio Millepensee. The lead cast members will also perform the theme song, titled Tsuppari-kun vs. Sekitori-man. The series will premiere on January 11 and will broadcast on Tokyo MX, among other TV stations.

Published by Earth Star Entertainment, the manga, drawn by Tsugeo Terada and Piyo, began serialization in Comic Earth☆Star on February 10, 2012. It has since received six 12-episode anime adaptations, with the sixth season currently airing. The series was originally animated by MAPPA until Millepensee was given the responsibility in 2015, animating the fourth season and onwards.

Teekyuu Train: "Brakes? What's that? Can you eat it?"

To everyone complaining about how this got so many seasons:
Guys. Each episode is 2 minutes long.


It'll need 13 seasons to have be as long as a 22-minute 12-episode series. I don't know if it'll get that many, but Teekyuu sure isn't stopping yet—they at least need to make Kanae's wish from S3 come true.

Marathoning Teekyuu may be hazardous for your sanity.

Not really. I felt really good about it I rode my Unicorn to work next morning, played golf with Jesus in the afternoon, and smoked some pot in the evening with my waifus.

Marathoning Teekyuu may be hazardous for your sanity.

Lol more teekyuu seasons, i think i should start the series before i reaches the 10th season.

malvarez1 said:
How does this show get seven seasons?
By being good and selling well.


There are other shows that deserve it more.
Which has nothing to do with this show.

luinthoron said:
And, of course, I will continue to suffer and watch the rest as well...

This got 6 season already :O

MrAwesome2015 said:
azzuRe said:
I want to watch smoke teekyuu for the rest of my life
We all do.

This be getting a seventh season while every other anime struggling to get a second.

How does this show get seven seasons? There are other shows that deserve it more.

azzuRe said:
I want to watch smoke teekyuu for the rest of my life
We all do.

Sury said:
Most successful short anime ever?
Maybe Hetalia? I think it might sell better than Teekyuu.

Most successful short anime ever?