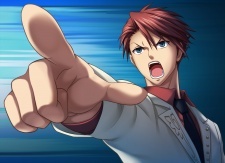 NightmareCrusher Jan 31, 2019 10:12 PM
How are you gentlemen? All your base are belong to us. You are on the way to destruction.

Hershel_Layton Jul 20, 2016 9:55 AM
Just noticed the new character sprites and I must say I'm not a fan of them, especially Beatrice's. Still better than the classic sprites (they look like they're drawn by a preschooler), but those eyes will require some adjusting.

I'll keep my finger crossed for Danganronpa's sequels. Those two shows are the only ones I'm interested in from this season's list. Well, there's also Amaama to Inazuma, but I plan to stash it for later.

That translation is weird, since we already have the game's which sounds miles better. And yeah, love Rie's voice acting when she plays a character that's not a tsundere.

Hershel_Layton Jul 19, 2016 4:34 AM
The soundtrack is reason enough to buy it, though I will wait some time to pass to buy it and read it from beginning. Also, it's only the fist four episodes that have been released for now, so there's that. I wanted to re-read it again to look for all the foreshadowing for all the revelations that happen it the end so it should be an interesting experience.

As for Danganronpa, I have the sequels on my PTW list, I'm just waiting for them to finish airing, as I believe it'd a better experience to binge watch it than waiting on a weekly basis for another episode. The adaptation of the first game, while rushed as hell (the investigations were 30 seconds long), was overall decent and seeing the characters animated was great. As the sequel doesn't have a 20+ hours source material to adapt in 12 episodes, I expect it to be less rushed and if planed well, maybe on the same level as the games.

Hershel_Layton May 15, 2016 9:59 AM
Doesn't sound too promising... Game adaptations tend to be bad representations of their originals. But I do like the setting and the characters so I'll give it a try, though the bar will be raised pretty low. Might as well watch the anime adaptation of the first game to see how low the bar will be raised. Also, I'm disappointed Byakuya's name is missing in the character list for the sequel.

Hershel_Layton May 14, 2016 10:21 AM
Just finished the game. I expected a more open ending when I saw there would be a sequel, but with this pretty much all of the mysteries are solved. It was a good and satisfying ending, though I didn't really like how Chiaki showed up out of nowhere end helped them to figure out what to do.

So, now what? Wait for the anime sequel?

Hershel_Layton May 11, 2016 11:07 AM
After finishing the 4th trial I must agree with everything you said about the mini-games and the debates. I just wanted to finish the mini-games as soon as possible, since the tension was great in this trial. I didn't know who the killer was until they brought up the soundproof rooms in the discussion. Though, once I saw how Gundham gets along with Sonia, I had a feeling either he or she would end up as the killer, but I just couldn't figure out how the murder was carried out. A shame really, I wanted him to survive till the end, mostly because Sugita was voicing him and I like how eccentric he was.

Hershel_Layton May 10, 2016 4:20 PM
The 3rd episode is now completed. Once Chiaki showed me the black curtain in the conference room, I was 90% sure Mikan would be the killer. Didn't expect she would end up like that though.

While I do hate the PTA, it's probably the easiest mini-game to beat since you can just randomly click till the shields break. The Hangman's Gambit is indeed a pain in the ass now. The logic dive isn't too bad.

I must agree with the difficulty level now being harder. In some cases I just had to guess the correct answer. And yes, the consent thing is a great addition.

Hershel_Layton May 9, 2016 5:32 AM
The ,,Meat on the bone'' part was confusing. I even had to check it in a walkthrough since I couldn't get the answer right and I hate the PTA.

It wouldn't be Danganronpa without Monokuma, so yeah... The part when he showed up brought a smile on my face. Usami is a bit annoying, but it's obvious she's scheming something, so I look forward to see what her agenda is.

Hershel_Layton May 8, 2016 10:50 AM
I was planing just to check if Danganronpa works, but instead I ended up marathoning it till the end of the second trial. It's still addicting and fun as before, though I have to admit that figuring out halfway trough the trials who the killers were, was a little bit disappointing. Hopefully the rest of the cases won't be that easy to solve.
And I can't believe they'd kill the best character right off the bat like that.

Hershel_Layton Apr 25, 2016 11:20 AM
I wanted to ask you if you got your hands on the game yet. If I didn't have two assignments I had to finish till next week, I would have played the second part already. Keeping a balance between studying and relaxing has become much harder this month.

Is the gameplay and and atmosphere of the first game still there? And is the big guy really Byakuya?