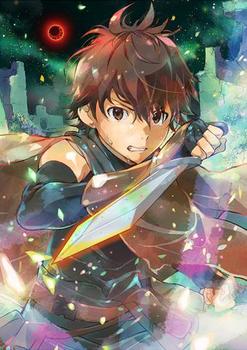 The official YouTube account of TOHO Animation posted a video announcing that the fantasy light novel Hai to Gensou no Grimgar (Grimgar of Fantasy and Ash) will receive a TV anime adaptation. The announcement was also made via Niconico stream. The series is scheduled to premiere in Winter 2016 from studio A-1 Pictures. Ryousuke Nakamura will direct the series, and Mieko Hosoi has been announced to design the characters.

Hai to Gensou no Grimgar is written by Ao Jyumonji and illustrated by Eiri Shirai. It began publishing in June 2013 and is currently ongoing with five volumes in print. It has also received a manga adaptation drawn by Mutsumi Okuhashi which began publishing in April.

Before Haruhito had realized what happened, he was surrounded by darkness. Why was he here? Where was here? Even now, he still didn't know. Those around him were the same as him, no one remembered anything other than their own names. And when they emerged from the darkness, the world that awaited them seemed like something out of a video game.

In order to survive, Haruhito forms a party with the others, learns fighting skills, and as a soldier in the reserve force, takes his first steps into the world of Grimgal. What awaits him there, he doesn't know...

This the story of an adventure born from the ashes. (Source: NanoDesu)

Hai to Gensou no Grimgar on MAL

Ok so i just finished the last episode of season 1 but i don't want to wait till season 2. Can somebody help me, and guide me to website where i can read the light novel or even buy it?

From the synopsis, it's like a mass teleportation into a fantasy world rather than a video game based theme. It doesn't sound like there's any gaming mechanics involved nor main character and others have any memories from their previous (modern?) world.

Now that I think about it, this premise actually sounds similar to utawarerumono, albeit in a shonenized approach(from the cover art).
Regardless, I'm in! <3

mayukachan said:
Voice cast is out.

zaki, yoshino AND hosoya? instantly sold.
That cast is so weird, can't tell if my I'm exciting for what they are trying to do or terrified.

Mogzo's seiyuu at least looks like Mogzo I guess. :P

But like, Yume's is ok, was looking more at Toyosaki Aki.
Shisoru? Please let that be your typo, her name is Shihoru. I guess it's ok too, it'll be her first time doing this type of character and since she has pretty much only done genki characters... She's more your notKyoAni-Nagato (Shihoru, that is), hard to imagine whoever voiced Yuuna also voicing Shihoru but I can see how she could make it work, she's still pretty new and all. Hell, HanaKana would be a good pick for her too, if played for shyness rather than braindamage.

Was hoping for Sakaguchi Daisuke for Ranta since his characters usually have the right amount of self-confident, cockyness and selfawareness, which is something that needs to be done right with Ranta otherwise he's just an annoying kid everyone will hate until his arc happens, I seriously hope that's not the case because his personality is really subtle and hard to pick up on and if you give him an extra annoying voice you're not going to be helping anyone.

Hosoya Yoshimasa... WHAT. HOW. Seriously what the hell, I can't tell if it's going to be funny trying to see him pull of a weakling's voice or cry because they are doing an 180 on Haruhiro. ;_;
He's seriously a Hanae Natsuki or a Nakamura Yuuichi.

Voice cast is out.

Late to the party, but wow, this looks amazing! Like, amazing amazing, you know? I am hoping for some good adventure done in here, I see the potential in this!

Hopefully it's not getting only 1 cour though, but that's probably the safe way to go.

Seems promising.
I might give it a go, and actually read the novel before it is aired.

oh god how annoying ranta can be in animated form

rageiX said:
another Novel adaptation
whew....the anime of 35th platoon was so rushed..too many skipped scenes
even DanMachi and Overlord had some skipped scenes themselves

As someone that has read the source material, I can say that the people who initially liked SAO for its concept but were put off due to the harem, fanservice, and unrealistic characters will probably like Grimgal. Despite people already calling it a generic trapped-in-a-fantasy-world LN, I think many people will be pleasantly surprised, assuming that they keep it 100% faithful to the source material. That being said, it has a much different feel compared to other series of its kind, such as DanMachi, Overlord, Log Horizon and SAO, so I won't be surprised if fans of those series end up becoming bored with Grimgal.

another Novel adaptation
whew....the anime of 35th platoon was so rushed..too many skipped scenes
even DanMachi and Overlord had some skipped scenes themselves

LN
A1
synopsis that sounds like some more sword art online garbage.

Took the words right out of my mouth.

I suppose this is only 1 cour based on the sypnosis.

The music is amazing though. I hope they use it in the actual anime.

Reminds me DanMachi . İ hope i get to see something similar as i thought .

Well, at least it's not a battle academy. Fingers crossed, eh.

simo000 said:
Paulo27 said:
With the time that it took you to write it you could have read a chapter or two and figured things out for yourself. ._.
Look, I'm not reading that, but I'm just going to tell you this is not your generic story, there's no ecchi, there's no "quest" (if there is it's in later volumes and you won't see it), there's no harem, MCs are weak and poor as shit, one of them is going to piss you off everytime he opens his mouth and this is a surival/tragedy story, it's not a happy-go-lucky series.
They could spend the first 3 episodes fighting goblins because that's what happens in the novels, they fight goblins, because they suck. People are going to drop this because "there's no progress" or "characters are annoying". Those ass shots? The director loves his thighs and ass. In novel all the fanservice you get is a bath scene and the fact that one of the girls has big boobs.

Can't blame you too much I guess, the other LN adaptation "like this" coming next is bottom of the barrel trash.

You're right, I should have just read a couple chapters but I'm too hot headed.
Yes, I was trying to cover myself. I think all the negativity shouldn't just be dismissed as "insults" though. A lot of people are obviously sick of light novel adaptations that, based on their synopsis and PV and pictures or w/e seem to be generic. Of course sometimes people are wrong, and from what I can gather that may end up being the case here based on how you describe it.
But at this point I can't help but wonder why, I hate your generic LNs just as much as the next guy but when I read this synopsis it felt fresh, a bunch of people wake up one day in a place they don't know without their memories and any abilities? Maybe I was just really optimistic at the time but this always felt like it had the crazy amount of potential it ended up delivering.