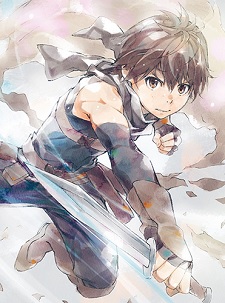 The official website of the Hai to Gensou no Grimgar TV series, which began airing on January 11, announced that the first Blu-ray and DVD volume will contain a 10-minute episode 2.5 anime. That volume will also contain the first two episodes of the series.

The first Blu-ray and DVD volume will go on sale on March 16. The cover art of the limited edition release (pictured) is drawn by character designer Mieko Hosoi. Six Blu-ray and DVD volumes are scheduled for release through August 17, but it is not known if the remaining five volumes will also contain anime specials.

The Blu-rays and DVDs will also include one-hour variety shows hosted by the cast of the series, as well as original stories written by author Jyumonji Ao. Guidebooks to the world of Hai to Gensou no Grimgar are also included as bonuses.

Hai to Gensou no Grimgar Special on MAL

That promotional visual actually looks neat for the news. Not expecting much from the special though unless they add some good music like with the most recent episode.

This will adapt the bath scene at the end of the episode (confirmed on Twitter).

That scene was actually kinda amusing and felt like a side-story even in the novels from how random and silly it was. Looking forward to it.

You can actually see Mogzo lying on the grounf as Ranta gets kicked in the anime, they basically just showed a bit of the special.

I don't see that being enough for 10 minutes though so I wonder if there's something else, can't imagine it being too plot relevant though and I can't really think of any scene they might want to bring up in the leftover time.

Hey, maybe they can adapt how Mogzo joined the group in the novels or Haruhiro's first experience in town in other special, r-right?

Maybe it will be 6 minutes of content that should have been in the recent episode in place of that insert song montage/post-montage conversation, followed by 4 minutes of talking about boobs.

Sounds great, I might buy Grimgar if it ends up good, but I doubt I will because it's way too expensive.

Good,they know what they are doing...They used that 10 minute for something else in the actual episode but didnt cut down the fanservice either...