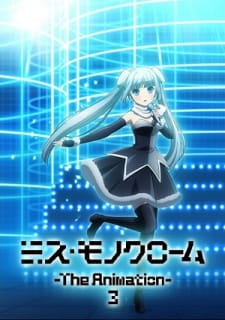 Miss Monochrome is an original character designed by Yui Horie. The character was used as a 3D virtual singer during one of the seiyuu's concerts and has a range of merchandise. In Fall 2013, the character received her own animation which aired for 13 episodes. The second season is currently airing.

Wow at the short gap between 2nd and 3rd one. I'm in, though.

More miss monochrome? I'm in, the 2nd season is better than the first one

that was fast...
i like miss monochromes songs....i wish it'd have different OP/ED per episode
the question is: When will monochrome ever get concert?

I'm happy for Hocchan that this is doing so well.

It's a cute little fun series, I'm glad it's getting this kind of support.

If Mana-chan doesn't get killed this season, I sure hope it happens in S3.

Seems like she will stand out much, much more.

Not much of a break between this and next season though.

These are pretty cheap to make like Teekyuu. Although it needs a duration boost to 12 minutes.