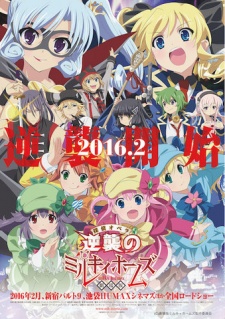 Advance tickets will be sold between September 19 and October 6 and will cost 1,500 yen. Customers who purchase these tickets will receive a movie edition clear file. A Milky Holmes event, themed as an athletic meet, will also be held on September 19 at Makuhari Messe, which is the venue for Tokyo Game Show 2015 that weekend. Tickets for the athletic event are priced at 3,000 yen.

Synopsis
The four members of Milky Holmes are going on a study tour. While soaking in the hot springs among snow monkeys, alarms interrupt the relaxing environment! It was the work of the Thief Empire. A fierce battle between Milky Holmes and the Thief Empire begins, with both sides using their Toys (special powers). Furthermore, with the arrival of the Genius 4, a three-way fight occurs! In the midst of battle, a violent lightning strikes from the sky. Struck by the lightning, the four Milky Holmes girls lose their abilities.

Save yourself. Before it's too late.

I guess I should start the series soon!

I thought this Anime isn't good.

I want a lot of Saku, Kokoro and Twenty, and for god's sake I don't even want to remember seeing the annoying Feathers ever again.

But no, what we get is fucking Milky Holmes and other crappy stuff rofl XD
Milky Holmes>Hataraku Maou-sama
Actually, you don't even have Milky Homles in your list, how do you know it's crappy?

WHO'S READY FOR DAME DAME

The director of S1 and S2 is back! I'm all on board for this. Woooooo.

We got our heart shaped mouth back guys.


TheNaturalPerm said:
I'll recommend this franchise to my 10 year old cousin. Seems like something she'd love.

Finally the return of the DAME DAME. Like what I see. All it needs now is a Mori Arty cameo

Thank you! This better go back to the crazy great comedy the show was. Please forget season 3 and 4(though I haven't finished season 4 yet so maybe it'll be good but I don't know)

TheNaturalPerm said:
I'll recommend this franchise to my 10 year old cousin. Seems like something she'd love.

Not such a good idea

I'll recommend this franchise to my 10 year old cousin. Seems like something she'd love.

Too bad it's only a movie instead of a third season.

With no mention of Totsugawa, The Feathers, or Marine, this would have been a great place to finally tie up that Moriarty plot thread, but fuck it, I'm hype

This is pretty much the greatest news. Not only do you have Moriwaki supervising the porduction, the original director for the first two seasons, you got the Cromartie and Jewelpet Happiness director helming it. Who is the perfect fit for Moriwaki's wacky, absurdist sense of humor. Its going to be a sequel worthy of Milky Holmes.

I hope they go even crazier, especially considering its a movie. Definitely looking forward to it, and seeing the Milky Holmes be their useless selves, as well as more Kokoro-chan!

> 'A fierce battle between Milky Holmes and the Thief Empire begins.'
YEAH

> 'Struck by the lightning, the four Milky Holmes girls lose their abilities.'
AND THEY'RE BACK TO BEING USELESS TOO?

Yeah this is much everything I wanted from a Milky Holmes sequel. Can't wait.

The good Milky Holmes is back after 2 seasons of what should never be mentioned.

Yes, the real milky holmes is back.
Hope they don't tone down the gags.