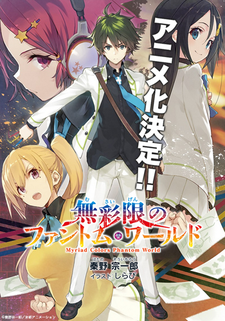 Kyoto Animation has announced via its official Twitter that light novel Musaigen no Phantom World will be receiving an anime adaptation. No further details were included in the announcement.

Musaigen no Phantom World is a fantasy light novel written by Souichirou Shinno and illustrated by Shirabi. It was published in December 2013 and received an honorable mention in the 4th Kyoto Animation Awards in 2013. The award is for original works that include novels, manga, and scripts, and the winners have a chance to get an anime adaptation by Kyoto Animation.

Synopsis
In the near future, spirits and monsters are in full sight. A boy leads a group of people with special abilities as they plot against a massive organization that takes advantage of a certain incident and eventually know the truth about their world in the process. (Source: Official site)

Musaigen no Phantom World on MAL

Kyoani? Harem? Huh?!
They need to give us another season or a movie of Hibike Euphonium, not something like this.

YES! I honestly didn't read the description, but the "Kyoto Animation" tag along with the "Action" tag has me hyped for it already.
I was hoping they would do more action. Their actions scenes in Kyoukai no Kanata and Chuni are incredible.

hope the description of the story i just read is actually made as vague as possible, and that it pulls off a rokka

This sounds interesting. Some classic superhumans fighting against monsters. Looking forward to it.
On and a plot twist it seems.

why not Hibike s2? i guess they don't want fans feeling salty, throwing fires at each other...

I usually don't care for the works KyoAni chooses to adapt. I found Hyoka, Amagi Brilliant Park, and Beyond the Boundary to all be underwhelming in their own unique ways. KyoAni's shows may look pretty, but I prefer substance over aesthetics.

Sooo...basically we can expect to see a butchering of the source material in their adaptation, a half-assed romance plot that never fully flourishes, and a bunch of yuri/fujobait to pander to otakus.

will probably check it out because it's kyoani

seems interesting .
I'll give it a shot before I decide on skipping out or not. (":

lmfao i love u plebs talking out of ur ass

I believe it was a runner up and not a winner. Not sure though.
It was actually an honorable mention in the fourth KyoAni Awards.

Source: Anime News Network
I'm willing to take a bet at hoping this is more than (or not) just a generic fantasy harem series since that honorable mention from KyoAni awards made me curious about this work. AFAIK, this contest barely gave these kinds of awards to anyone unless their works are really noteworthy.

the visuals must be nice
but havent read the actual...planning
Im curious how theyre doing this

In Kyoani I trust.

ZachM said:
Why's KyoAni gotta be wasting their time and talent on something like this?

It's going to either be like Amagi again where I'll roll my eyes back into my head the first episode onwards, or like KnK which is basically a safe bet for sales but really uninspired.

I guess they've been in economy panic mode ever since after Hyouka.

at least not another 'homo' anime. ooopps, I meant bromance..

As long as the colors aren't flashed like Kyoukai no Kanata. Don't want to further hurt my eyes.

I long for the days when KyoAni was an automatic seal of quality. Now it's just a big ol' circlejerk of pretty genericness.