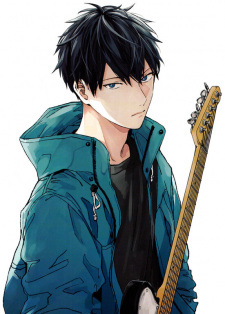 Stargazingx Oct 7, 5:31 PM
Hey I see we have certain favorites in common, like Haikyuu and Yona. I noticed you also like Paradise Kiss, my favorite work by her is Nana, if you haven't given it a read or watch yet (:

Monad Mar 12, 2018 4:34 PM
Glad i was helpful. It seems that it was a good decision to write what i understood as an answer to the op even if it was a lot late to satisfy him it at least helped people like you watching after.
Been some time now for me so i don't remember things very much, maybe i should do a little re-watching.

AlexxP Sep 3, 2017 12:46 PM
Hi Brandon! Sorry, the reason I've been off for so long is the same reason as last time. My little Brother isn't doing very well and has been in the hospital a lot and I've been hanging out with him there.

I've been watching a little bit of anime though. None in the last month or so though. Boku no Hero s2 looks good though, might start that soon.
I've been playing and watching people play video games on twitch lately, it's been a lot more relaxing for me recently. Anyway lol, how have you been? Its been like over half a year.

AlexxP Jan 26, 2017 3:25 PM
Hello. Been pretty busy but I think it's starting to maybe slow down a little bit. How have you been? Hope you've had a good Christmas and New Year. I've been craving some anime recently so I'll hopefully watch some this weekend.

Dudu Dec 15, 2016 6:38 AM
I know dude, it's freaking amazing.
I postponed it for waaaay too long, and it was only this last month I watched the first season (I have yet to watch the 2nd season).
It's GAR gambling at its best. The suspense is insane and manages to keep your attention the whole time... I can't find a single moment in the anime that felt out of place or boring in the least. The strategy and gambling with some great visual metaphors that grounds some of the mature themes; and paired with the unique animations is what makes this one of my favorite shows. OH SHIT. That bridge of death part was insane lmao.

I know, right?! Feel like I should put him back to my favorites where he belongs... :^)
He's such a great and admirable character; starting out as a full-blown bum, but as he slowly faces all these challenges and bumps in the road you start loving him and root for him. You've got some stupidly intense shit ahead of you... Enjoy it man!

AlexxP Dec 10, 2016 12:26 PM
Hey, I've been busy and will be busy for a while probably with work and other personal stuff.
I'll reply to your message once I get some more free time.
Good luck with your driving tests and with whatever else you have coming up. I really hope everything goes well!

AlexxP Nov 30, 2016 8:24 PM
Yeah, I haven't watched that many since I was watching One Piece as well. That was when I watched over 500 episodes of OP in less than a month. I did the same thing with Bleach, finished it in no time as well.
I would have liked Sakurasou waaaay less if it wasn't for Jin x Misaki. They had a good ending thank god, I would have been upset if Misaki got left out. The light novels really went off the rails huh? Sorata becomes a horny teen and Nanami disappears... wtf?
I honestly don't get it either, Nanami was the clear choice here.

Sorry! I don't know what I was thinking not just saying the time in the video he dropped his hat. It's at 2:14 in.
Yeah, usually they usually just do a solo career on the side and stay part of the group but sometimes they can't.


I'd buy Evangelion instantly as well, it's in my top 10.
I ordered some TG manga. I don't buy manga a lot but it's TG so I got it.

Prison School is perverted and has a lot of ecchi but it's fine. Actually there is one thing I don't like about it and it's the sweat lol. I've noticed Japan obviously has some fetish for sweat, but it's just gross to me, even in animated form and it's in like every episode. I'm actually wincing at some scenes with the VP because she's constantly sweating. Not just small sweat but a lot, like it would be a slipping hazard to walk behind her, she's damaging the hard wood floors and carpeting in every room she enters. Other than that though, I've been loving every episode. It's so weird and cool that I can't stop watching it, I hope hope hope they do more seasons. I kept hearing their voices in everything and I like them so I figured I'd put them in my favorites. The guy that does Yato has a perfect voice for anime, which is why he's used so much obviously.

JoJo part 2 is soooo much better. I love the characters is pt2 way more as well. Joseph > Jonathan.
I see why people like JoJo now, really enjoying it. It's still ridiculous, but that's the charm. I didn't think Dio was totally 1d. His whole thing was he wanted to be better than his father. He wanted to prove that your fate isn't determined by your bloodline. His dad was a a piece of trash and he wanted to be more than him. He then goes to live with Jonathon and his dad and see's the dad is a great man and Jonathon is becoming a great man which goes against what he went out to disprove. He then starts realizing he's a lot like his father in many ways and it pisses him off, probably because he was scared. He really didn't want to be trash like his dad. He wasn't the most complex villain ever but he wasn't as bad the villain from Greed Island in HxH. That guy sucked. I thought Dio was fine, I see a lot of people saying he was one of the worst villains so I guess I'm in the minority on that. I suppose I found his motivation for being evil more interesting than other's.

Ah, you know the spoiler. I knew it as well, it was posted like everywhere. I still got pretty excited when he shows up though. I'm a crybaby as well lol. I see you watched Strong World, it's my second favorite after the 6th movie, then Film Z is third. I've seen most of them but never added them to my list for some reason. I didn't enjoy the first 5 or so. Which is your favorite now?

The reason I never broke from my routine was because I was scared. I'm not even sure what I was afraid of... people? Idk, I was just afraid of breaking my routine. I'm still in a bubble, I go to work but I don't really do anything else. I get invited places by my cousins all the time wanting me to meet their friends, idk, their trying to help. It's nice of them but I never say yes. I always say I'll go next time but I know I won't. If I did go I'd end up embarrassing not only myself but them as well. I'm super awkward irl, I don't know how to hold conversations and I get embarrassed easily and my face gets hot and I freeze. I tend to end the conversation as quickly as possible and it comes of as rude sometimes. I'm screwed until I can work on this. Knowing someone who's going through something similar really makes me feel like I'm not alone.
I use to have to give myself pep talks just to walk into the convenience store, I don't really feel the need to worry about it that much right now, as long as nobody talks to me I'll do fine. The problem though it I'm in the south and everybody talks to everybody.
I know exactly what you mean, I wonder if people back in the 60's and stuff dealt with this or if it's a new thing now that there are so many more reasons to stay inside and easier than ever to not have to go out anywhere. People now can stave off loneliness by having friendships online when they couldn't back then. My mom always says I'm like her dad so maybe it's just something your born with. Idk my mom and brother are social ninjas so I doubt it's hereditary.
Do you remember when you actually got your anxiety? I was always shy but sometime in 9th grade is when it started, I was walking up the stairs of my high school and remember out of nowhere the most intense felling of so many emotions and feeling. Embarrassment, fear, like everybody was watching me and they knew what I was thinking and they were going to talk behind my back and it just got worse from there. It never got better all of High School. I'm curious if you can remember when your started an if you can recall the exact moment.

I might have a tip about the drivers test, this is what I would do. Our anxiety is obviously different but it might help so I'll just say it. My anxiety would be a little better on some days than others, sometimes I was able to talk my anxiety away with some time, didn't always work but I would just say stuff like "Why are you afraid? Nothings going to happen, did anything happen last time? Calm down, everything is going to be fine." obviously say what ever you feel would work, that's just what works for me. Then on a day you are feeling good, go and give it a shot. I wouldn't force a specific date because I would personally just freak out everyday and then on the the day I was supposed to go I just wouldn't. You probably know all of this though. I hope any of this is helpful in anyway and if not good luck and I hope you find a way to get it done.

Wow! Best compliment ever :'). I wasn't expecting you to like it so much thank you. Why haven't you wrote any reviews? Not something you're into?
"I don’t remember getting such big analysis from you before, either… but that might be because some of the things you’re watching now is making you think more." yeah probably this, there's only so much to think about and analyze in My Hero Academia lol.
I've just been in the mood for more mature and thoughtful series lately, well, I say that as I'm obsessed with Prison School lol, although to be fair it definitely is mature.

Ergo Proxy is full of potential but it's not quite living up to it yet. Animation is beautiful and the Dub is up there with the best. The voice of the main character fits her so well, it just seems so natural. It's a bit slow and I found myself bored a couple times but so far I'd say it's interesting. I'll update my thoughts once I get a little farther.